By the time you read about a “new trend” in The Wall Street Journal, it’s likely that you’ve already missed it.

So to identify new investment opportunities, I focus on information sources that are a bit more unusual.

One of these resources can help its readers see the future. Literally.

I’ve used it to help my clients predict stock price movements 12 to 18 months before they happen, and to earn massive returns.

“Bigger Than The Web”

Perhaps you’ve heard about a technology known as 3D printing.

3D printers look like desktop printers. But instead of printing words, they “print” objects – everything from sneakers and chairs, to handguns and cars.

So it’s no surprise that investment companies like T. Rowe Price have been recommending the industry to their investors for the last couple of years.

But truth be told, I’m a little curious what took them so long.

You see, I first started focusing on 3D printing back in 2010…

By the time anyone else had picked up on it, my readers had already doubled their money.

How was I able to spot the opportunity so early?

The answer is the cornerstone to my disruptive technology investment approach.

Where The Magic Happens

My success as an investor comes from a simple three-step system.

Next, I identify segments within those trends that have the fastest growth and highest margins.

Finally, I screen for the most innovative companies within those segments. This is where the magic happens.

But this last step raises a question:

How do we objectively measure which companies are the most innovative?

To do this, many investors analyze a company’s budget for Research & Development, or review presentations they’ve made.

Those methods are fine. They’re part of my process, too.

But I study something different.

I study a set of documents that reveal a company’s product and innovation road-map.

I study a company’s patent filings.

Why? Because patents are irrefutable and tangible proof of a company’s technological leadership.

But before a company produces something nowadays, it needs to patent it.

If they fail to take this step, competitors can copy the product – and “steal” the profits.

That’s a surefire indicator that we’re on the cusp of innovation – which in many cases, means an increase in a company’s sales, profits and share price.

Let’s take a look at 3D Systems so you see what I mean. 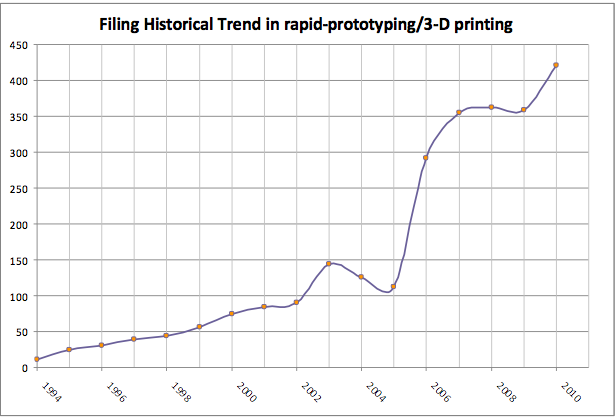 By the beginning of this year, it had risen to nearly $100.

Happily, those who followed my recommendation made an 855% profit.

I’ll get into the other criteria in a future article.

To earn maximum profits, you need to identify disruptive technologies long before others…

And long before you read about them in the pages of The Wall Street Journal.