Having a sense of security is priceless.

But nowadays, that sense can be hard to come by.

The world is chaotic today. Tens of millions of people are out of work. Crime is spiking. Unrest is rising.

But hidden amidst this chaos are opportunities.

It all starts with helping people feel safe in their homes.

For many people, the first step towards creating a sense of security starts with their home.

Unfortunately, home-security systems can be very expensive. For example, look at traditional solutions from companies like ADT…

These systems have a base price of at least $500, require professional installation, and charge monthly fees of at least $40.

But more recently, disruptive security startups like Ring have come along.

Ring’s base system costs just $200, and includes cameras and motion detectors. Fees for monitoring and video recording start at $10/month.

At this lower price-point, the market has quickly exploded:

In 2018, consumers across the world bought 54 million security cameras…

For more than $1 billion.

The thing is, Ring still faces major challenges to consumer adoption — in particular:

Kangaroo is an Internet-enabled home-security system. 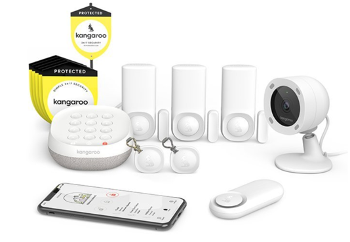 Kangaroo aims to solve the problems of price, installation, and privacy:

Price: Users can get started for as little $20. And monitoring costs just $99/year.

Easy to Use: This is a sophisticated system, but it’s incredibly easy to install and use.

Thanks to these benefits, the company has made quick progress:

And now you can invest alongside these professionals…

You see, Kangaroo is currently raising $1 million from investors like you.

The minimum investment is $150.

Should you invest? Let’s take a look at some of the pros and cons:

On the “con” side, however, its current valuation is steep: up to $80 million.

The valuation of a startup is the same thing as the market cap of a public company. It’s the total value of the company at a particular point in time.

So when you invest in a startup, you “buy in” at its current valuation.

We aim to earn 10x on our private investments. To reach that goal here, Kangaroo would need to be acquired or go public in the future at a valuation of at least $800 million.

Is that possible? Given Ring’s $1 billion takeover price, yes, it’s possible. But not many companies get acquired for such large sums.

That’s why I’m not recommending that you run out and blindly invest in Kangaroo. This is a risky venture, and it requires substantial investment research.

But if you believe in the company’s mission to help people feel more secure, it’s certainly worth a deeper look!