My Trend Trade of the Decade

I first started doing research on cybersecurity five years ago. And every year since, I’ve become more and more convinced about a simple fact:

Without adequate cybersecurity, our world is doomed.

Think about it: Our world is quickly becoming entirely digital and internet connected.

Nearly 90% of business assets are already digital. And now, with the Covid-19 pandemic accelerating the next phase of transformation, businesses will be moving everything online.

Tack on the billions upon billions of dollars pouring into the Internet of Things (IoT) and everything will eventually be connected to the internet — and, therefore, everything will be vulnerable to attack.

Even our own government gets it:

The White House pegged cybersecurity as “one of the most serious economic and national security challenges we face as a nation.”

The reason we find ourselves in this position is simple: As the Digital Age has unfolded, and as the need for protection has increased, the world has tragically underinvested in cybersecurity.

And therein lies the opportunity…

For years, worldwide spending on cybersecurity has totaled less than 1% of global gross domestic product (GDP).

In comparison, military spending as a percentage of GDP has routinely averaged close to 3% to 4% per year.

But what poses the greater threat to our world today: a military attack or a cyber-attack?

Research firm Centrify believes the transition to remote work has increased the likelihood of cyberbreaches dramatically. Email is the most common mode of attack. Microsoft (MSFT) alone thwarts billions of phishing attempts every year on Office365.

And yet, since the end of February, there’s been a 667% increase in spearfishing email attacks related to Covid-19.

Add it all up, and we’re dealing with an unprecedented challenge…

But that’s exactly why cybersecurity represents an unprecedented investment opportunity.

The action of the “smart money” — in other words, the venture capital firms that invest in the biggest emerging trends — proves it.

In 2018, total venture funding for cybersecurity firms topped $5 billion, up more than 20% from the previous year.

The actions of corporations and governments prove it, too.

Over the past few years, cybersecurity spending has been one of the fastest-growing areas of technology.

And Cybersecurity Ventures predicts that, over the five-year period from 2017 to 2021, cumulative global spending will exceed $1 trillion. 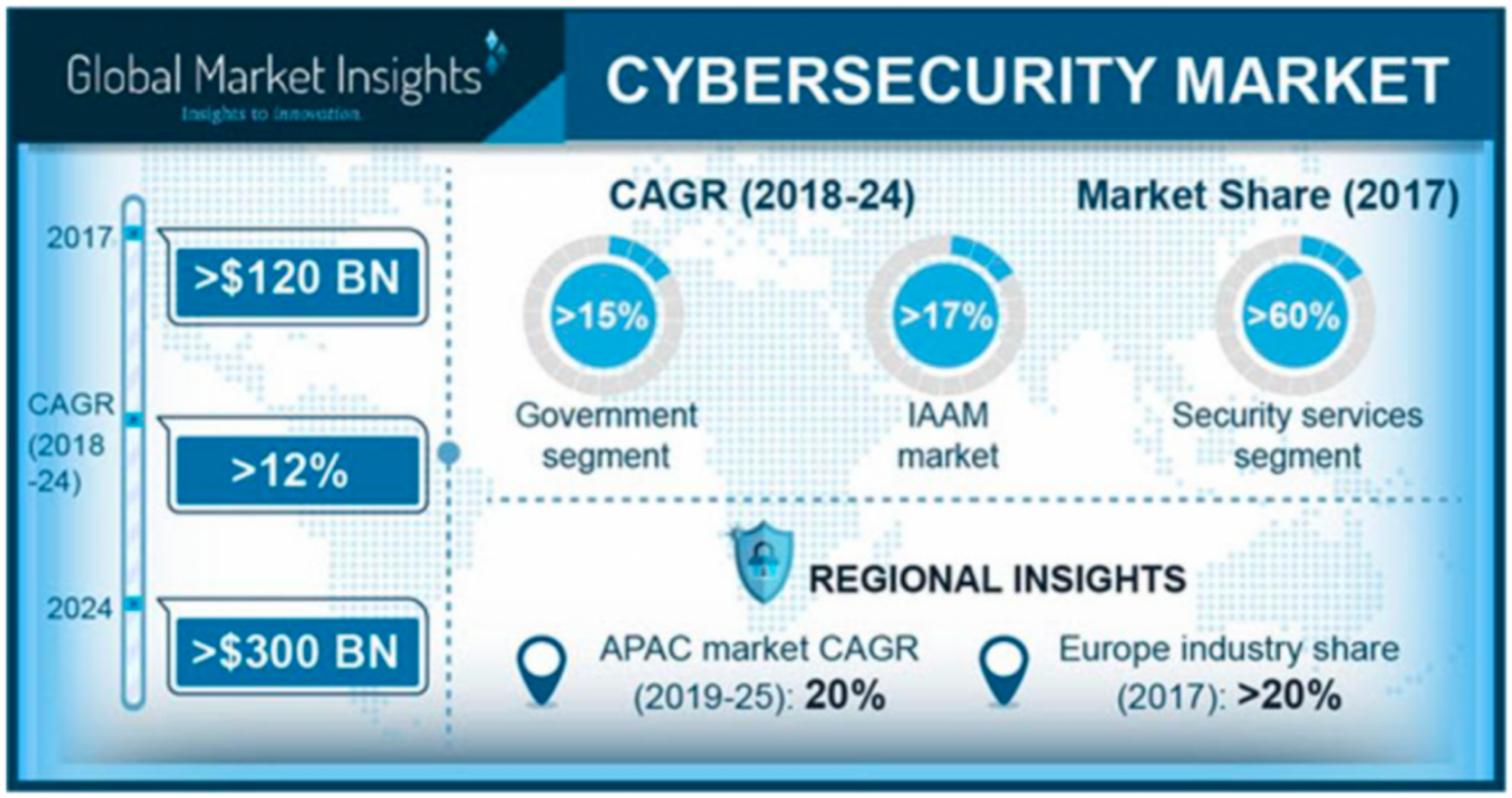 But here’s the sobering reality:

We’re not even spending enough to catch up with the problem, let alone get ahead of it.

You see, the growing amount of data being stored means the number of digital assets that need to be protected keeps expanding.

In fact, our “always on” society creates an astonishing 2.5 quintillion (one followed by 18 zeros) bytes of new data every day.

It can be hard to grasp the enormity of that figure.

To help, though, think about each byte of data as a landmass. The more bytes we produce, the larger the overall landmass gets. And every inch of it needs to be defended against attack.

Long story short: the cyberattack “surface area” is growing at a dizzying pace.

If cybersecurity spending increased at the same rate as data expansion, we’d be talking about a $2.6 trillion industry.

Yet even the most bullish estimates only call for spending to hit a couple hundred billion in 2020.

As one industry insider confessed, “We can’t hire our way out of the problem. There aren’t enough resources and the cost is too high.”

Add it all up, and the stage is set for cybersecurity budgets to explode as every company, agency, and government tries to beef up its defenses to avoid being a victim — or worse, the enabler of a national tragedy because of inadequate safeguards.

I estimate that the top security vendors should easily be able to sustain 20% to 25% revenue growth over the next five to ten years.

By comparison, the average S&P 500 company is increasing sales by only about 5.4% right now.

Against such a backdrop, I can’t envision a more compelling investment trend.

In fact, this is quite possibly the “Trend Trade of the Decade.”

“While the cyber-security industry is poised to create some huge winners, it’s important to note that there will never be a perfect solution. No company can hope to completely wipe out all cybercrime. The best one can do is to try to stay on par with, or a bit ahead of, the hackers. As such, the best companies won’t build products for a point in time but will focus on continuous innovation.”

So said Glenn Solomon, managing partner at GGV Capital, a few years ago.

That’s because, with a mature product, hackers would have had time to isolate its vulnerabilities.

And there’s no single, slam-dunk company we can invest in to easily profit from the boom. There’s simply too much competitive risk involved.

So how do we best position ourselves to profit?

In this case, here’s what makes the most sense:

Invest in an exchange-traded fund that focuses on cybersecurity.

Here are four options for you to review and choose from:

With a single investment, at a low cost!