One "Commodity" You Must Own Today

By Matthew Milner, on Wednesday, September 7, 2016

At the time, just a single oil company (Exxon) was on the list of the world’s Top 5 Most Valuable Companies.

Within a decade, however, oil shot up to $100 per barrel. All of a sudden, the Top 5 list was dominated by companies like Shell and Total.

As they grew, these companies made fortunes for their investors. But today, there’s a new group of companies dominating the list...

And they’re focused on a very different “commodity.”

There’s a New Kid in Town

The types of companies on the Top 5 list are constantly changing.

This makes sense: as major new trends in business and the economy take hold, the current champions fall from grace, and a new crop rises up to replace them.

Given this ever-shifting landscape, the key to profiting as an investor is clear:

Make sure you invest in the big trends!

To see what I mean, check out this 15-year chart of the Top 5 Largest Companies by Market Cap, complements of Visual Capitalist. 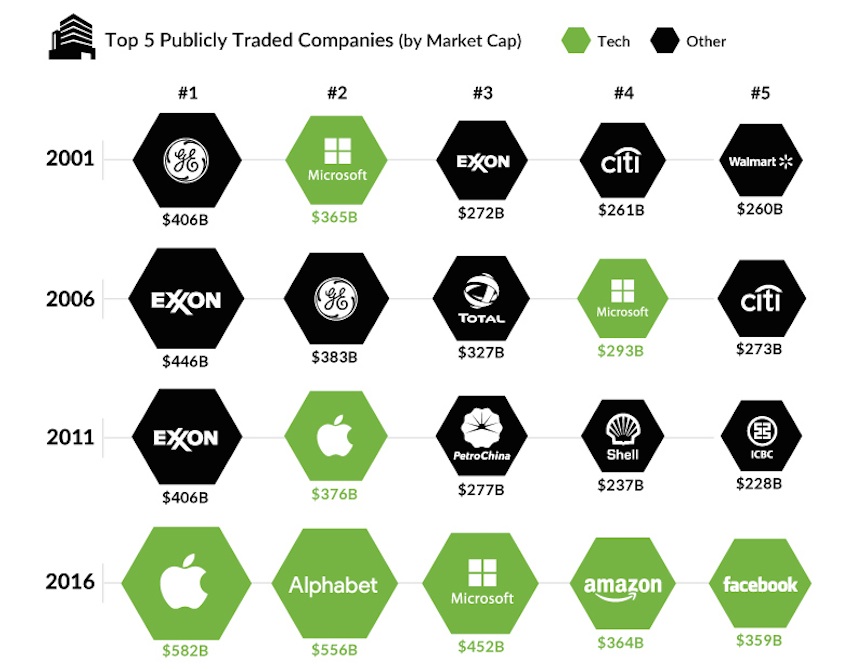 As you can see, back in 2001, conglomerates and major retailers were at the top of the charts.

Then, with the rise in oil prices, companies like Exxon and Shell took over.

But now there’s a different king of the hill—

As you can see, the top companies from 2016 share a common attribute:

They’re in the online technology sector.

25 years ago, literally none of us were online… there was no online.

But today, 3.4 billion people are connected to the Internet.

For companies that can attract large, global audiences—companies like Google and Facebook—the profits can be extraordinary.

To put that in perspective, the world’s largest retailer and former “Top 5” title-holder, Walmart Stores, earned only $14 billion in profit for 2015. And keep in mind, Walmart employs nearly 40 times the number of people that Google does.

You see, tech companies can keep their costs relatively low. They don’t need to invest in pricey real estate, inventory, or employ a lot of people.

When they need to expand, they just add some new computer servers.

And here’s the best part:

There are many, many sectors that are still ripe for technological disruption—from automobiles and medicine, to education and entertainment.

In other words, online tech companies won’t just be on the Top 5 Most Valuable list this year and next year…

We believe they’ll keep topping those charts for years to come.

If you’re a student of the market, you might already know that the vast majority of any stock’s movement is based on the health of the overall market and the momentum of its sector. (In fact, Investopedia reports that “economic/market factors account for 90%” of a stock’s movement!)

As investors, we can’t do much to change the movement of the market…

But we sure can pick the sectors we’ll invest in.

And since tech is in favor now—and will be in favor for years to come—that’s where you need to be.

And this year, Tech continues to shine:

For example, as of early September, the iShares U.S. Technology ETF (symbol: IYW) is already up 10.5% for the year.

But what if you could earn bigger returns?

Tomorrow, Wayne will show you a special area of the technology market where you can aim for returns just like this.