Our Upcoming Battle with China

China is killing us.

In 1990, it produced less than 3% of the world’s manufacturing output.

But now the Chinese government is investing billions of dollars into a new sector… and if it’s successful, U.S. citizens could really get screwed.

Thankfully, the U.S. still has a shot at competing in this space and winning.

Today I’ll show you how to profit from this upcoming showdown.

Growing up, one of my favorite cartoons was The Jetsons.

The Jetsons were a futuristic family. They lived in a beautiful house in the sky, drove flying cars, and enjoyed the services of their robot maid, Rosie.

The show was from the 60s, and at the time, many believed we’d soon be living in its utopian vision of futuristic technology.

But robots have made a lot of progress…

Over the last few years, the Chinese government has invested billions of dollars into robotics companies.

As a result, China is on a path to become the world’s largest producer of robots.

And they’re getting close to delivering on the promise of Rosie the Robot—handling tasks that are too mundane or too dangerous to be handled by humans.

Meanwhile, the U.S. has invested an embarrassingly small sum into this critical new sector.

Billionaire Mark Cuban (a “Shark” on Shark Tank and the owner of the Dallas Mavericks) is pushing Washington to spend $100 billion to get things going.

Frank Tobe, publisher of a trade magazine called The Robot Report, agrees that action is needed. “We better do something, or we’re going to be behind the gun,” he said. “We should be in the robot business, not just users of foreign robots.”

You see, much of what we buy today is made in China—by actual humans.

But if we fail to take action in this sector, much of what we buy tomorrow will be made in China (or other countries)—and be made by Chinese robots.

What actions can we take to remedy this situation?

Well, we could wait for the U.S. government to provide subsidies to companies that are willing to manufacture robots…

Or—and this is where you come in—we could make direct investments in innovative U.S. robotics start-ups.

This way, we can support the U.S. and we can aim to make a profit.

Meet Knightscope, the ”Security Guard” Version of Rosie the Robot

Knightscope is a technology company. It builds security robots that can predict and prevent crime.

Here’s one of them patrolling the Microsoft campus. 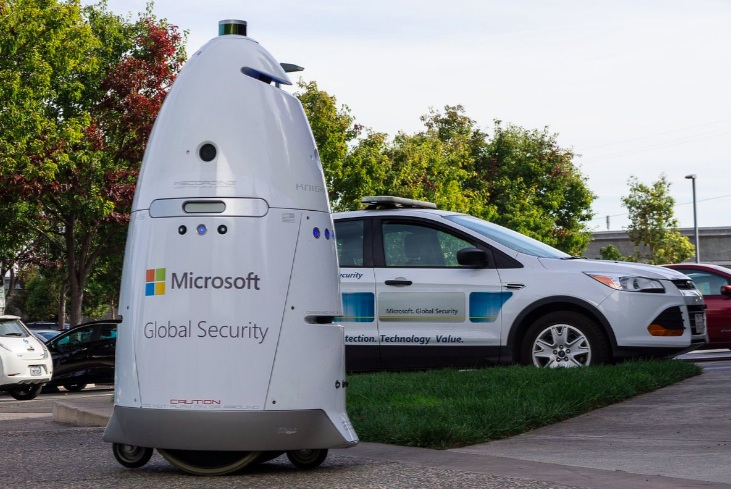 These devices are “autonomous,” meaning they operate on their own, gather real-time data, and report their findings to humans at the Knightscope Security Operations Center (KSOC).

Its smaller robot, the K3, is appropriate for indoor spaces such as sports arenas, shopping malls, and office buildings.

And its bigger robot, the K5, handles outdoor spaces like parking lots and corporate campuses.

Beyond Microsoft, Knightscope’s list of clients now includes the State of California, Westfield Malls, and The Sacramento Kings.

This is a big business Knightscope is going after:

Across the globe, $500 billion is spent annually on security.

Knightscope has already raised more than $14 million from investors including Konica Minolta and NTT DOCOMO.

Now it’s raising up to another $20 million from investors like you.

For you to earn 10x your investment (our target for start-up investments), the company would need to get acquired or go public for about $1 billion.

As I described last week, not many companies get acquired for such large sums.

So to be clear, I am not recommending that you run out and invest Knightscope. This is a risky venture that requires substantial investment research.

But if you’re excited to help the U.S. stay competitive—and if you’d like to start exploring private investments—you can dig into the details of Knightscope here »

Please note: Crowdability has no relationship with Knightscope, or with any of the companies or platforms we write about. Crowdability is an independent provider of education, information and research on start-ups and alternative investments.