Once in a blue moon, the U.S. government is actually helpful to investors like us.

In particular, a certain government agency has become known for tipping off investors to major new technology trends.

The agency in question is DARPA, short for The Defense Advanced Research Projects Agency.

This is the high-tech research arm of the U.S. Department of Defense.

DARPA is responsible for making huge, early investments in such technological breakthroughs as the internet, GPS, stealth aircraft, and self-driving cars.

Simply by following DARPA’s lead, you could have made a fortune on these trends.

But there’s no sense looking in the rear-view mirror. Because we have the chance right now to look forward.

You see, DARPA just tipped us off to the next big trend — and we’d be fools to ignore it.

As it turns out, DARPA is going “all-in” on Artificial Intelligence, or “AI” for short.

And here’s the key: DARPA recently committed $2 billion to accelerate the development of these technologies.

“We think it’s a good time to seed the field of AI,” said John Everett, the deputy director of DARPA’s Information Innovation Office. “We think we can accelerate two decades of progress into five years.”

Not surprisingly, now that DARPA is pushing all its chips onto this table, others are following suit. For example:

That’s a big check to write. But Microsoft founder Bill Gates predicts that AI technologies “could be worth 10 Microsofts.” That would be equal to a $10 trillion market opportunity. So, spending $1 billion to get there could be the best bargain in the market.

That being said, a $10 trillion market doesn’t get built overnight. No worries, though, because the near-term opportunity in AI is equally compelling, too.

For example, as you can see in the chart below, by 2025, annual spending on AI systems is expected to soar to almost $120 billion. That represents an increase of about 1,148% from 2018 levels. 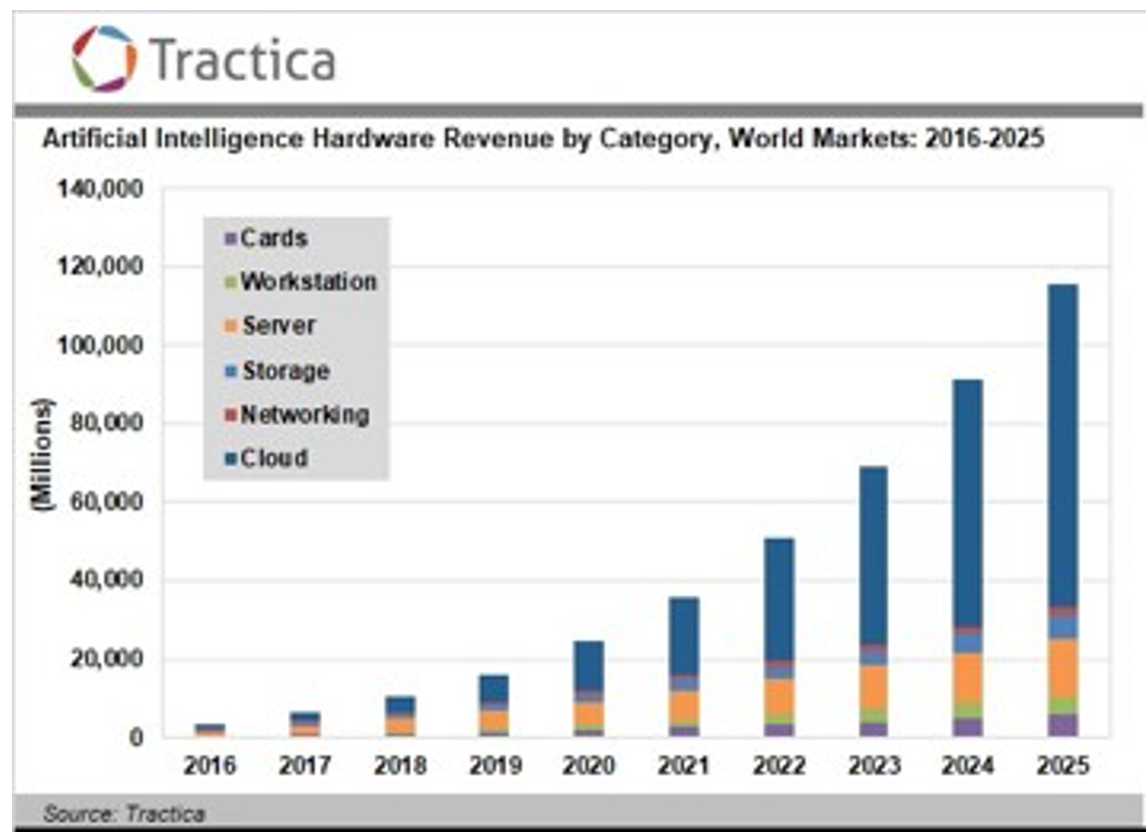 If you haven’t been aware of any of this activity, consider this your wake-up call…

Capital is flooding into AI from all corners of the market. And now that momentum is building, sales and profits will be close behind.

Add it all up — and now is the perfect time to position our portfolios to profit from the AI boom.

Next week, I plan to share the smartest ways to invest in this new mega-trend. But before I do, I want to make sure I allay any misplaced fears…

When we say “AI,” perhaps you’re conjuring up a world where robots stage a revolt and ultimately eliminate humans.

After all, that’s what physicist Stephen Hawking warned about in a 2014 interview with the BBC.

As he said, “The development of full artificial intelligence could spell the end of the human race.”

But at the moment, we’re still only scratching the surface of AI capabilities.

For one thing, despite how powerful computers are today, they’re nowhere near powerful enough to enable the potential of AI.

As Luke Nosek, co-founder of PayPal and now a pioneer and investor in AI, said, “We remain [many] stages away from creating an artificial general intelligence with anywhere near the capabilities of the human mind.”

For proof of this, look no further than the brain’s visual cortex. As compared to current AI learning systems, the brain has 1,000,000x more neural connections.

Making our Lives Easier and Better

Long story short, the possibility of “full artificial intelligence” emerging in our lifetime — or even in the next few generations — is close to zero.

Instead, it’s about computers becoming so powerful that they can take over certain tasks to make our lives easier, better, and more productive.

In my next column, I’ll focus on the companies making monumental advances in processing power to usher in the AI mega trend. Stay tuned!