Are you counting on Social Security to help fund your retirement?

If so, you could be in for a rude awakening.

You see, if you’re like most Americans, you’ve been led to believe that Social Security will provide for you once you stop working.

Social Security is on the road to bankruptcy—and if you don’t start preparing yourself now, you might end up on the same path.

How Did We Get Here?

In 1935, President Roosevelt signed the Social Security Act into law.

This was during the Great Depression, when more than 50% of senior citizens were living in poverty.

As most folks understood it, while you were working, the Government would take a piece of your paycheck and invest it for you…

And when you retired, it would use those funds to take care of you.

But as it turns out, that’s not how Social Security works at all…

Contrary to what many believe, Social Security doesn’t work like an investment:

Remember, when FDR first established the system, he needed to provide retirees with immediate assistance.

The way he achieved that result was by taxing the income of current workers, and then transferring that money to retirees.

And that’s how it still works now:

And when you retire, you’ll be relying on the next generation of workers.

For nearly a century, this system has worked just fine.

But now Social Security is headed for disaster…

And if you don’t watch out, it could take your retirement plans with it.

There are two main reasons Social Security is in trouble.

First of all, Americans are living longer than ever:

In 1935, when Social Security was first established, our average life expectancy was about 62 years. Today it’s about 80 years, and with recent medical advances, it’s expected to keep getting longer and longer.

This is good news—but the longer we live, the more money we’ll need.

The second reason Social Security is in trouble is because of the “Baby Boomers.”

The Boomers are the huge generation born from 1946 to 1964, just after World War II. Today, there are 76 million of them.

Over the next 19 years, nearly all of them are expected to retire, and 40% of them have zero dollars saved.

The reason Social Security was successful for nearly a century is simple:

There were more workers than retirees.

In 1950, for instance, every retiree was supported by 16 workers.

More recently, however, that number dropped to just three workers…

In fact, this is happening already:

According to a study from the Pew Research Center, as early as 2010, the Social Security system had negative cashflow of about $78 billion per year.

The Social Security Administration set aside “reserves” to cover scenarios like this—but the amount it set aside isn’t nearly enough, not by a long shot:

Take a look at this chart from the Congressional Budget Office… 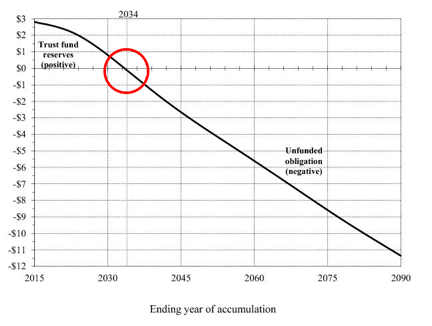 I’m sorry to be the one to show you this—but as you can see, if we stay on this path, Social Security will basically be unable to meet its obligations by the year 2034.

This is very bad news—2034 is just around the corner.

If you’re planning to be retired in the next 17 years and you don’t already have a big nest egg, you could find yourself in trouble.

Two weeks ago, we hosted a live presentation for about 3,000 Crowdability subscribers focusing on this exact problem.

During that presentation, we took a survey…

We asked if, given the health of Social Security, people felt they had enough money to retire. The results were astonishing:

More than 80% of our subscribers said they don’t have enough.

While that’s alarming, it’s not the end of the world:

If you have a small nest egg, and you have some time before you retire, there are steps you can take to boost your savings account.

For example, you could invest in the private markets. Given the high returns of private equity, that could help get your retirement back on track.

What if you have no money saved at all? And furthermore, what if you’re approaching retirement right now, or you’re already retired?

Well, as we explained that evening, you have just one option:

You need to identify ways to generate large amounts of passive income.

In fact, during our presentation, we announced a new service we created that does just that. It’s called Income Unlimited.

The goal of Income Unlimited is to give ordinary investors the ability to earn thousands of extra dollars every month.

The service filled up completely in just a few days.

But if you’d like to be notified when it opens up again, you can join our Early-Access Waitlist here »