This Start-up Built a "Time Machine"

If you could travel back in time, what would you do?

Then I’d sit at the southern tip of Manhattan and take a good long look at the Twin Towers.

Most of us dream about time travel, but we assume it’s impossible…

But recently, a tiny technology start-up based in California has cracked the code:

Today I'll tell you about it — then I’ll show you how you could profit from it.

But first, a caveat:

The type of time travel we’ll be exploring today isn’t what sci-fi writers or Marty McFly had in mind.

Instead, it’s a form of time travel enabled by a technology you might already be familiar with…

Virtual Reality (or just “VR” for short) is a computer-generated simulation of a 3D environment.

Just put on a special helmet with a screen inside — and you can instantly be transported to another time and place.

For example, here’s a picture of someone using a VR headset called the Oculus Rift: 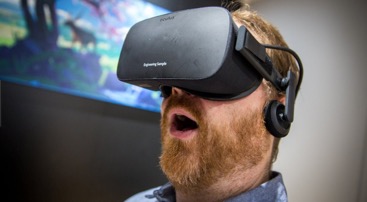 As you can see, this user is amazed. He’s fully engaged in the virtual world he’s experiencing.

Unfortunately, Oculus is expensive, and it still isn’t ready for mainstream use.

Its kiosk is called “OWL VR,” and it looks similar to the old coin-operated viewing stations you can find at the top of the Empire State Building. 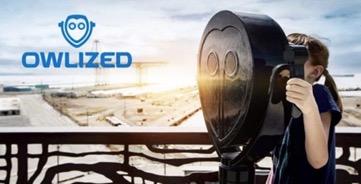 After you pay between $3 to $5 to unlock it and start moving it from side to side and up and down, instead of seeing your environment as it looks currently, you see a 3D “time travel” image of how it looked in the past.

It’s like you're standing in the exact same spot, but 100 years ago.

After unlocking the OWL VR, you look towards the Golden Gate Bridge.

You know the bridge is right there — you can see it in the upper right of this picture:

But as you can see in the image below, as you start moving the device, the bridge disappears…

It disappears because you’re traveling back in time one hundred years — the bridge hasn’t been constructed yet!

And now Owlized is creating time-travel experiences like this at some of the most popular destinations on Earth.

To start, Owlized is going after cities, parks, tourist attractions and historic sites.

This is estimated to be a $4 billion addressable market.

And since the destinations share in the revenue from the devices, they have a very good reason to give it a shot.

All that being said, this is a risky new venture, and it could face challenges.

Obsolescence — With all the innovation that’s happening in VR right now, Owlized could quickly be overtaken by a competitor.

Content Creation Challenges — To create 3D videos for its kiosks, Owlized relies on content partners. It doesn’t pay them upfront; instead, it shares its revenues with them. If revenues are light, these partners might quit.

Hardware is Risky — As we often point out, hardware-based start-ups can be riskier than digital businesses because of their high operating costs.

But if these risks don’t scare you off, here’s some news:

Owlized just opened a $1 million investment round, and all investors are welcome to participate. The minimum investment is just $50.

Just remember: investing in start-ups is risky, so you need to do your research!

Please note: Crowdability has no relationship with Owlized, or with any of the companies or platforms we write about. Crowdability is an independent provider of education, information and research on start-ups and alternative investments.