Once you see what it discovered, you’ll probably get scared too...

In fact, you might even be tempted to pull your money out of tech stocks and unsubscribe from the Crowdability newsletter.

But as we’ll explain today, that would be a big mistake.

You see, we’re about to show you a key piece of information that Goldman missed…

And then we’ll show you how that information could make you a lot of money.

This Chart Says It All

Here’s the chart Goldman included in its recent report... 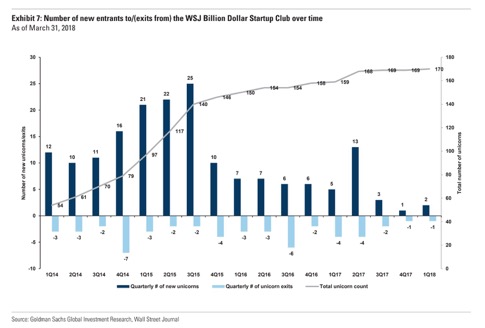 There’s a lot going on there, so let me draw your attention to what’s important…

Take a look at the dark blue bars.

Those bars represent the number of new start-ups that have become “unicorns.”

Unicorns are start-ups that grow to a value of at least $1 billion. They get their name because $1 billion start-ups are a very rare occurrence.

As you can see, since the number of new unicorns peaked in the third quarter of 2015 (at 25), that number fell off a cliff…

In fact, in the first quarter of this year, just two companies reached that $1 billion number.

And here’s why this data has investors shaking in their boots...

How Investors Could Suffer

Unicorns have been responsible for some of the most profitable private market investments of the past decade.

For example, Uber quickly went from being worth almost nothing, to being valued at more than $60 billion.

That explains why, by investing in Uber early, our friend and business partner, Howard Lindzon, turned every $5,000 he invested into $2 million.

Meanwhile, Facebook’s first investor, Peter Thiel, turned every $5,000 he invested in Facebook into $10 million after it became a unicorn and went public.

I could go on and on, but the bottom line is this:

Goldman saw that there were fewer and fewer unicorns — so it came to the conclusion that private market investors would start earning lower profits.

But as we discovered, that conclusion is dead wrong…

Here’s Where To Find the “New” Unicorns

You see, while it’s true that there are less traditional unicorns nowadays…

There’s a new type of start-up where a massive number of companies are worth more than $1 billion.

So while Goldman’s report is technically accurate, it’s missing a big part of the story:

It’s that, nowadays, many of the biggest tech start-ups are coming from the crypto world.

How to Invest in the Next $1 Billion Start-up

As you learned today, early-stage technology start-ups are alive and well.

There are still plenty of opportunities to invest in tech start-ups that can quickly rise in value to $1 billion or more — and help you earn massive returns.

But to take advantage of these opportunities, we need to expand where we seek out deals:

Specifically, in addition to searching for early-stage investment opportunities on private market “funding portals,” we also need to seek out early-stage crypto deals.

These deals are called Initial Coin Offerings — or ICOs for short.

If so, let us know in the comments section — and tell us which deals you’ve backed, and where you found them!