Could you ever have imagined there’d come a day when you couldn’t afford the basics?

That’s the reality many people are facing right now, even in a country as great and as wealthy as the United States of America.

And if we follow the data, it’s clear things could get much worse.

The thing is, when it comes to the markets, there’s always a bright spot. There’s always a sector that will soar. And the savvy investor knows how to take advantage of those opportunities…

Not just to protect themselves during turbulent times like these…

But to position themselves to earn potentially life-changing returns down the road.

To set the stage here, let me prove I’m not exaggerating when I talk about many Americans not being able to afford the basics. Just look at this chart: 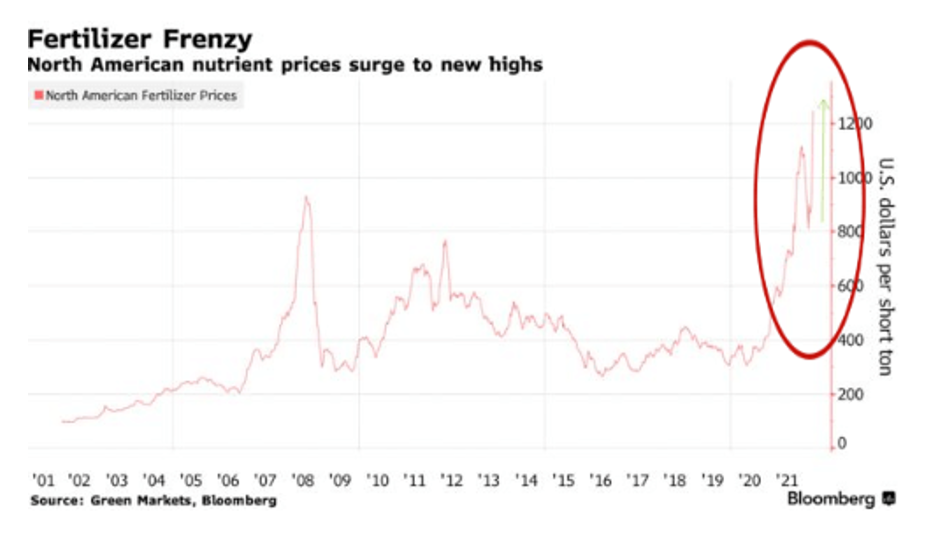 That chart shows the cost of fertilizer, which is one of the key components in the global agricultural system.

As the cost of fertilizer goes up, so does the price of food.

For instance, the price of wheat — a key ingredient of staples like bread and pasta — is up almost 100% in the past 18 months.

And as you can see in this chart, the overall price of food products is up 42% this past year: 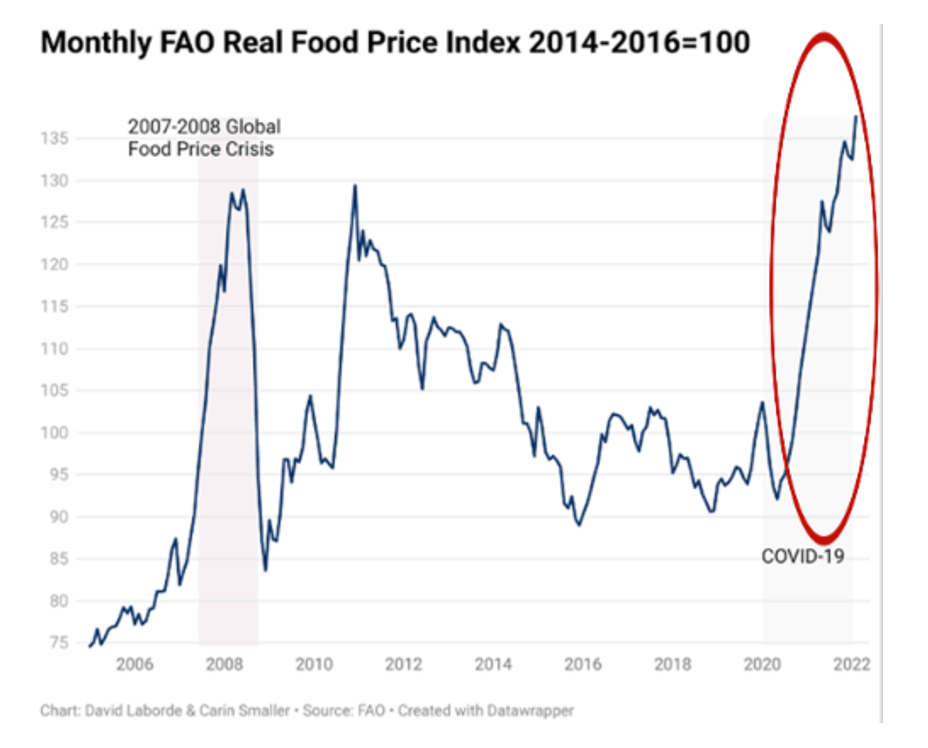 Sure, the Fed is raising rates and trying to tame this inflation. But that’s not going to help this situation in the near term.

The “Breadbasket of Europe”

That’s because this crisis has less to do with overall economic inflation, and more to do with the crisis in Europe.

You see, Ukraine and Russia are considered the “breadbasket” for much of Europe, Africa, and Asia. In a typical year, Russia and Ukraine account for approximately 30% of all global wheat exports.

With the war going on, who’s going to plant and harvest the wheat in Ukraine? No one.

And with global sanctions choking off trade, how will Russia continue to export wheat? They won’t — at least not to the degree the world needs so it can feed millions of people.

According to the New York Times:

“Russian shells have destroyed Ukrainian cities, homes, hospitals and schools. But the war has also reached deep into the fertile plains of a region known as Europe’s breadbasket, paralyzing harvests, destroying granaries and crops, and bringing potentially devastating consequences to a country that produces a large share of the world’s grain.”

It’s reported that one-third of Ukraine's farmlands may not be harvested or cultivated this year.

But as I mentioned earlier, when it comes to the markets, when one sector suffers, another almost inevitably surges.

This is especially true when it comes to the tech sector — and more specifically, tech startups.

The Next Big Tech Boom?

You see, startups are all about solving big problems.

When a visionary entrepreneur spots a problem, they often aim to solve it by deploying cutting-edge technologies.

For instance, when Larry Page and Sergey Brin realized how big the web was getting — and how difficult it was to find high-quality information within it — they created the world’s greatest search engine, Google.

And over time, not only has Google helped billions of people get access to everything they’d ever need on the web in seconds, but it’s also generated hundreds of billions of dollars in shareholder value.

And now I believe we’re witnessing the same phenomenon play out in a different industry:

The global food and agricultural industry.

Visionary entrepreneurs are launching groundbreaking startups to help solve this massive problem. And they’re doing it the same way Larry and Sergey did: by deploying technology.

This burgeoning industry has a name: AgTech, short for Agricultural Technology.

This sector has been heating up for a few years now. But because of the current economic environment, now it’s absolutely exploding:

And last year, funding into AgTech startups topped $5 billion for the first time ever!

That’s a big jump in a short period of time. But like the man said, you ain’t seen nothin’ yet…

According to market-research firm Crunchbase, over $5.6 billion has been put into AgTech startups in the first six months of 2022 alone!

Not only that, but many of these companies have been getting acquired or going public — generating substantial returns for early investors.

Plant Your Seeds Now (and Watch them Grow)

But today, thanks to the rise of equity crowdfunding, you can claim your stake in groundbreaking AgTech startups and get positioned just like the pros.

Here are a few startups to explore as you begin your research:

To be clear, I’m not recommending you run out and invest in these companies. You’ll need to perform your own research first.

But if you’re looking for emerging sectors that can soar…

Sectors that can help protect your portfolio during turbulent times like we’re in today, as well as help you earn potentially life-changing returns down the road…

I believe this is one of the most exciting and relevant places to start your search.