Could This Man be “The Next Elon Musk”?

My wife’s family is from a small town on the coast of Maine called Brunswick.

We visit every summer and I always look forward to it…

We spend time with her family, walk around historic areas filled with shops that haven’t changed for generations — and most importantly, we eat the best lobster rolls in the world!

It’s a timeless place, which is why I was surprised to find something new happening there.

You see, a tiny startup recently set up shop there…

And as I’ll explain today, not only could this company become a global leader in one of the hottest markets in the world today…

But for the cost of a few lobster rolls, you could claim a stake in this company right now!

Right before our eyes, an astonishing new sector is taking shape.

It could soon become the most valuable sector in history.

In fact, according to Merrill Lynch, it could soon be worth $3 trillion.

The sector I’m writing about?

There are many reasons it could become so enormous...

For starters, it could provide a virtually unlimited supply of natural resources.

As just one example, space could supply an infinite amount of gold, as well as an infinite supply of everything from iridium and silver to palladium and platinum.

Then there’s energy. It’s estimated we only have enough oil, coal, and natural gas to provide energy for another thirty to fifty years. But in space, there’s an infinite supply of energy.

Then there’s the vast market potential for space tourism, which explains why companies like SpaceX, Virgin Galactic, and Blue Origin are investing billions of dollars into it.

Add it all up, and you can start to understand why CNBC reported that investors poured a record $14.5 billion into space-related startups last year.

Given all the promise of the commercial space market, it’s no wonder we’re seeing demand for certain services begin to skyrocket (pun intended).

For instance, take a look at this chart from Statista: 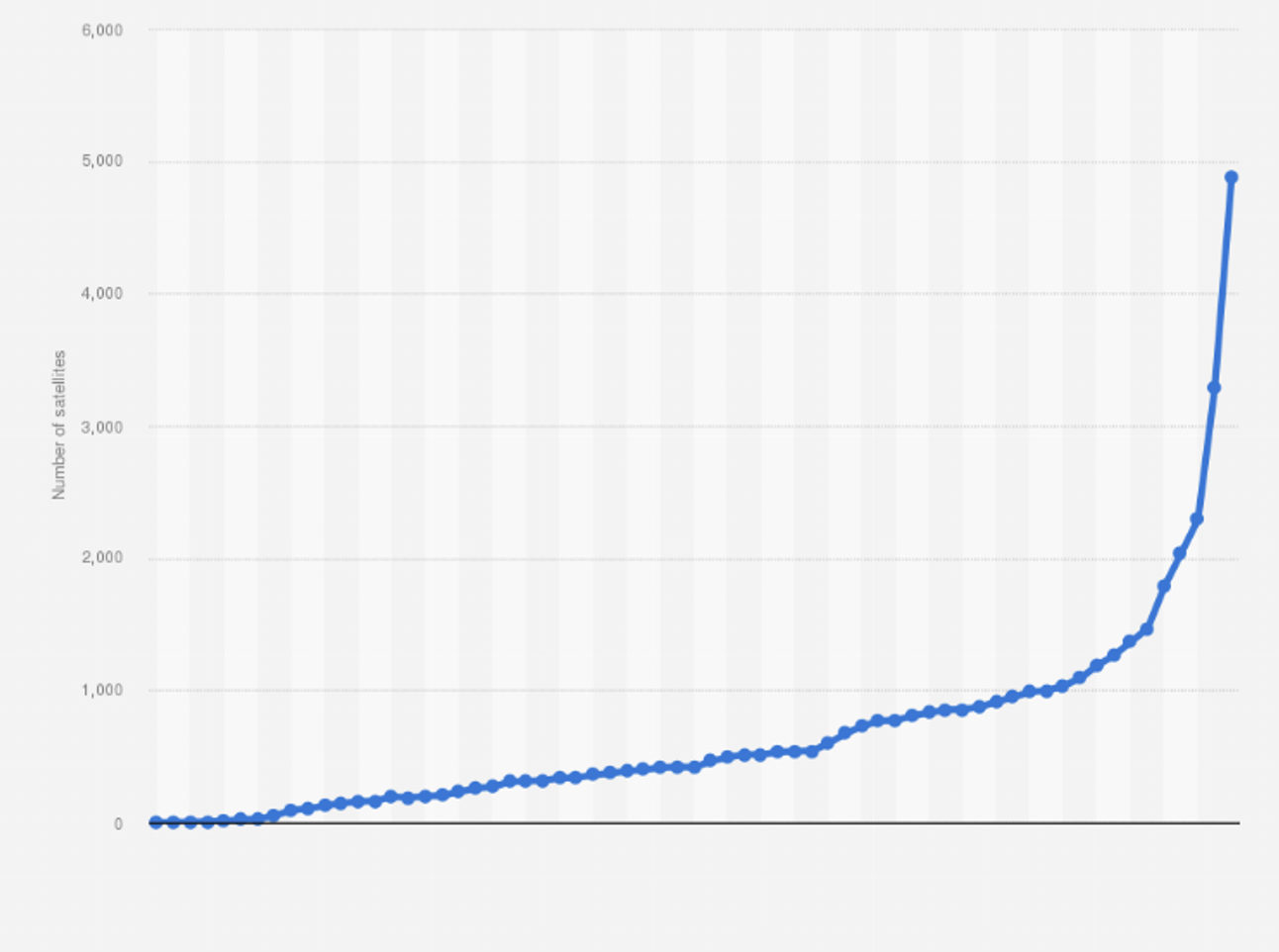 It shows the number of active satellites in orbit from 1957 through 2021. And as you can see, the number has been exploding — and it’s only going to get bigger.

But this presents space-related companies with a significant problem…

You see, the rockets that launch everything from satellites to ships into space are enormous, and they create significant pollution. Just look at some of these recent headlines:

But thanks to a tiny company based in Brunswick, Maine, a solution might be on its way… 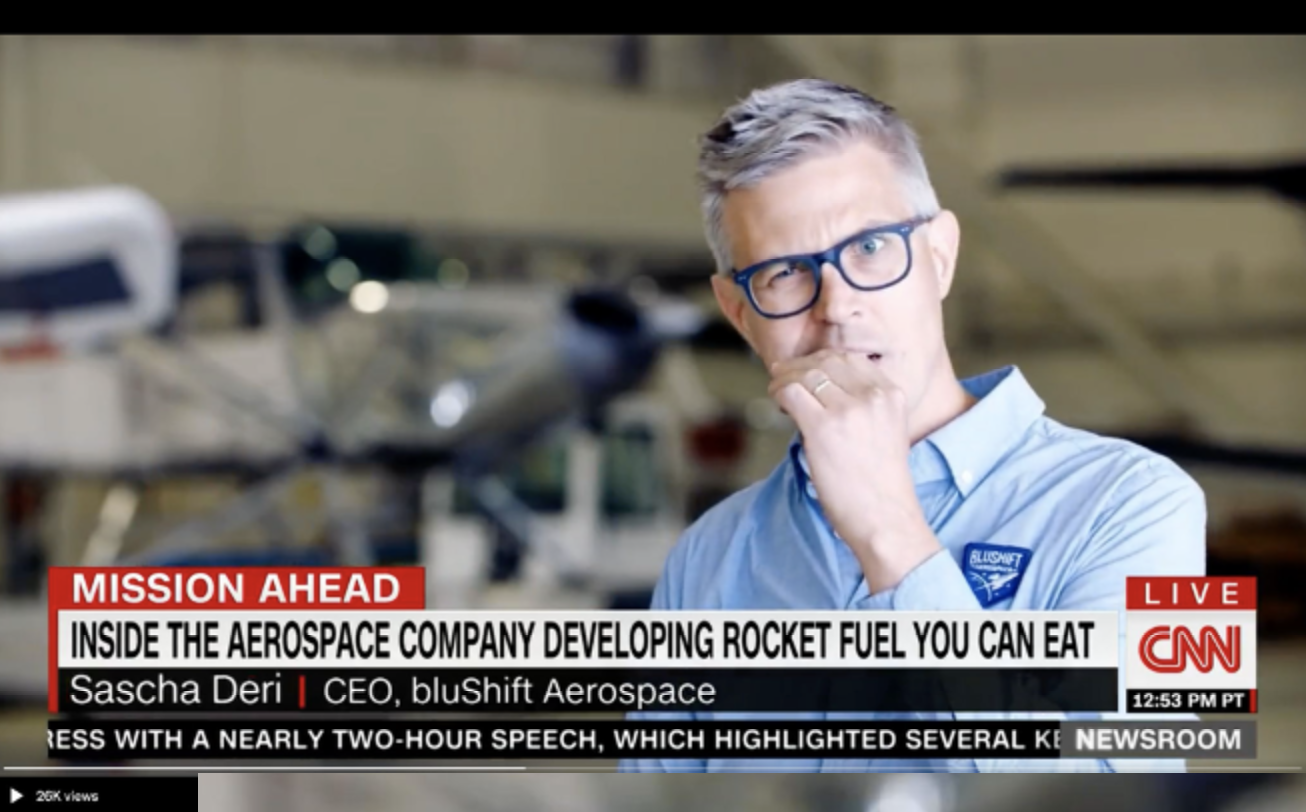 This man you see here, Sascha Deri, is the founder and CEO of BluShift Aerospace.

And while it looks like he’s taking the last bite of a lobster roll, he’s actually eating something else:

That’s right — he’s ingesting a fuel that can power a rocket into space!

BluShift’s biofuel — which is non-toxic and carbon-neutral — has already been tested with an actual rocket. You can see the full video coverage by BBC here »

But it also wants to make them happen more quickly, and at far lower cost.

You see, at the moment, in order to launch any satellite into orbit, you need to contract with a launch provider. A firm like SpaceX, for example.

But firms like SpaceX always give priority to large satellites. That’s because they can charge them a lot more money.

BluShift, on the other hand, is targeting the other end of the market. The company wants to cater to micro-satellite and nano-satellite providers.

That’s because, as technology continues to advance, and hardware components become smaller, micro- and nano-satellites will become much more common.

And BluShift is positioning itself to take advantage of this trend.

According to the company, it’ll be able to do launches “for 25x less than the traditional spaceports and get customer's satellites this highly desired orbit 12x faster” than the competition.

Should You Get in Now?

If BluShift is able to pull this off, Sascha Deri could become the next Elon Musk, and BluShift’s value could rise into the billions of dollars.

Which is why it’s so exciting that the company is giving everyday investors like you the chance to invest in it today — for as little as $100.

Keep in mind, just because you can invest in a startup like this, that doesn’t mean you should.

This is a new market and a young company.

It still has a number of hurdles to overcome before it can truly “take off.”

For example, BluShift’s test-rocket only flew a mile into the air. In order to put satellites into orbit, it’ll need to get a rocket up to 300 to 600 miles from the earth’s surface.

Furthermore, the company has to manage the logistics of producing enough fuel and rockets so it can handle many clients.

So, while I’m excited about this startup — and excited to visit it when I’m in Brunswick next summer — you’d need to do far more research before you decide to invest in it.

On top of that, as Matt and I always say, if you’re going to invest in startups, be sure to invest in many of them. Diversification is key in this market!

If you’d like to learn more about BluShift, you can view the company’s funding page here »