Do NOT Buy Another Pot Stock!

2019 is on track to be the biggest year ever for the marijuana market.

You might be tempted to start picking up shares of popular pot stocks.

But until you read today’s article, hold off from making any investments in this market.

As you’ll learn, not only could you invest in the wrong companies and lose your money…

But you’ll also miss out on getting into one of the most unique — and potentially, most profitable — marijuana investments we’ve ever seen…

Once again, take a look at this chart: 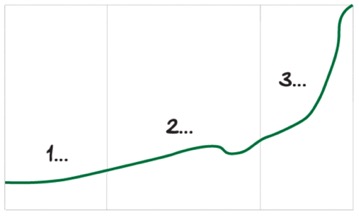 As we explained last week, this 3-step chart illustrates the cycle that every emerging market goes through.

Each step gives investors a way to make money. For example:

Step 1 — When an industry first emerges, there’s lots of hype and speculation.

If you can get in (and out) quickly, you could earn big gains very fast.

But as we warned you about in our previous articles, you could also lose your shirt.

You see, companies in this Step aren’t built on a strong foundation, so their prices can crash just as quickly as they shoot up.

Step 2 — During this Step, new industries get very little attention. After the crash at the end of Step 1, investors grow disenchanted, so they tune out.

But this is where the foundation gets built for the future of this industry.

This is where the vast majority of an industry’s sales and profits come from. If you invest in the right companies, you can do very well here — but you could also lose your shirt.

You see, in Step 3, thousands of new companies pile into a market hoping to “strike it rich” during the gold rush.

But at this point, it’s difficult, if not impossible, to pick which companies will strike gold — and which ones will come up empty handed.

Which is why we do not recommend investing during this Step.

As I’ll explain in a moment, there’s a much easier and safer way to make money.

As you’ve seen, investing in Step 1 gets you into an industry too early…

And investing in Step 3, gets you into a market too late.

However, investing in Step 2, just like in Goldilocks and Three Bears, is just right.

First, because all the hype has evaporated, you can get your investments at lower prices. And the less you pay upfront, the bigger your profits can be in the future.

Next, because there are fewer companies, it’s far easier to identify the best ones.

And finally, because Step 2 companies are building the foundational technologies for the future, they can sell their services to all the companies emerging in Step 3.

In the early-days of the Internet, tons of tiny companies went public on the Nasdaq.

Their share prices soared to staggering heights — but they soon plummeted back to earth.

Take Webvan.com, for example. This company provided consumers with instant delivery of almost anything, from groceries to movie rentals.

In 1999, Webvan went public and reached a market cap north of $1 billion. But when the bubble burst, Webvan was delisted from the Nasdaq. Before long, it went out of business.

But since then — thanks to Step 2 companies that built the true foundation for the Internet — tons of new companies have emerged to fulfill the promise of Webvan.

For instance, look at Instacart…

Instacart is very similar to Webvan — but since it’s a mobile app, you can monitor your delivery, send instructions to your delivery person, etc. This makes it very powerful.

And that’s why Instacart is now valued at more than $7 billion.

But that’s not the real story here. The real story is the technology that’s enabling Instacart and all its Step 3 competitors to succeed — and that’s the iPhone.

With its built-in GPS and 90 million+ active users, the iPhone makes it easy for customers and delivery people to stay connected.

As the foundational technology behind the success of Instacart and so many others, the iPhone has been the key to Apple’s growth.

That’s why, since its launch, Apple’s stock price has shot up by roughly 1,000%!

How to Become a “Marijuana Millionaire”

This Step 2 company has created a technology that’s fundamental to the growth of the marijuana market.

Simply put, every company that produces a cannabis-related product will need its services.

Which is why we’re forecasting a $1 billion sales surge that could begin as early as June 1st — that’s just a few months away!

On a tiny $5,000 investment, that’s enough to hand investors like you more than $1.2 million in profits.