Don't Buy a SINGLE Pot Stock Until You Read This...

Last week, we showed you that cannabis is the fastest-growing industry in America today.

We also revealed why individual investors like you could reap the biggest profits.

One way to capture those profits would be to invest in “pure-play” medical marijuana stocks. But as we explained, those opportunities are rare — and they’re very risky, too.

So today, I’ll show you two other ways to invest in the marijuana sector…

As you’ll see, both of them can be extremely profitable.

When presented with a new sector, many investors seek out “safe” investments.

And since they tend to equate the safety of a company with its size, they often put their money into large-cap marijuana stocks.

But as it turns out, chasing large-caps can be a risky move. For example:

Bottom line: the hype surrounding cannabis can cause large-cap pot stocks to soar. But as soon as a temporary downturn arrives, these stocks can crash fast and hard.

So, if large-caps aren’t the answer, how about small-cap “penny pot stocks” instead?

The Promise of Penny-Pot Stocks

Many penny pot stocks have gone straight up in value.

They’re not real because, just as quickly as penny pot stocks go up, they tend to crash — and all those “gains” just disappear.

You see, penny pot stocks are dangerously volatile, even more so than large-caps.

For example, you just learned that CVSI shot up from $2 to $147. But what you didn’t know is that it soon collapsed to just 24 cents: 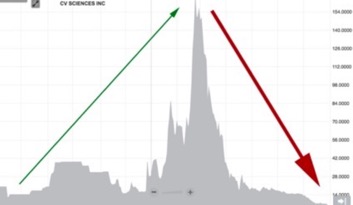 But then it cratered to just 61 cents! 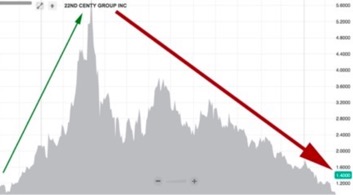 Unless you can time your trades perfectly, investing in penny stocks can be a recipe for suffering big, quick losses, or for getting “stuck” — i.e., holding onto a stagnant investment for months or years, just “praying” it bounces back.

A Better Way to Play the Marijuana Market?

As you learned today, investing in pot stocks — whether they’re large-caps or small-caps — isn’t the best way to make money in the marijuana market.

So in his essay tomorrow, Wayne will show you a different way to play the marijuana market…