Earn 1,000% Returns When the Market Crashes

The market has rallied from its March lows. But it’s still highly volatile.

And with 30 million Americans out of work and unemployment claims still rising, the market’s next move will likely be down, down, down.

If you have a chunk of money tied up in stocks, this could be very scary for you.

But today, I’ll show you how to turn this “crisis” into a massive money-making opportunity…

All you have to do is add some startup investments to your portfolio.

How to Make Money in Startup Investing

When you invest in a startup, there are two main ways you can make money:

Either the startup goes public, or it gets taken over by a larger company.

But just because one of those events happens doesn’t necessarily mean you’ll make money!

You see, just like with any investment, your profits depend on buying low and selling high — in other words, your entry price and your exit price.

With stocks, your entry price is a company’s stock price, or its “market cap.”

It’s the same thing with startups, but the words are different. With startups, you look at “valuation,” which refers to the value of the entire enterprise.

But regardless of what it’s called, basic investment rules still apply:

If you pay too high of an entry price — too high of a valuation — even if the company goes IPO or gets acquired, you still might not make money!

To show you what I mean, look at Uber Technologies (NYSE:UBER).

In 2018, in its last financing as a private startup, the company was valued at roughly $72 billion.

Today, however, it trades at a market cap of just $57 billion.

So even though investors got in while the company was still private — and a full year before the company went IPO — they still didn’t make money on Uber.

The moral of the story here is simple:

When investing in startups, you need to pay very careful attention to valuation.

And here’s why this lesson is even more important today…

When Prices Come Down, Your Profits Can Go Up!

When stock market prices come down, so do startup valuations.

To show you what I mean, look at this chart from Daniel Li at Madrona Venture Group: 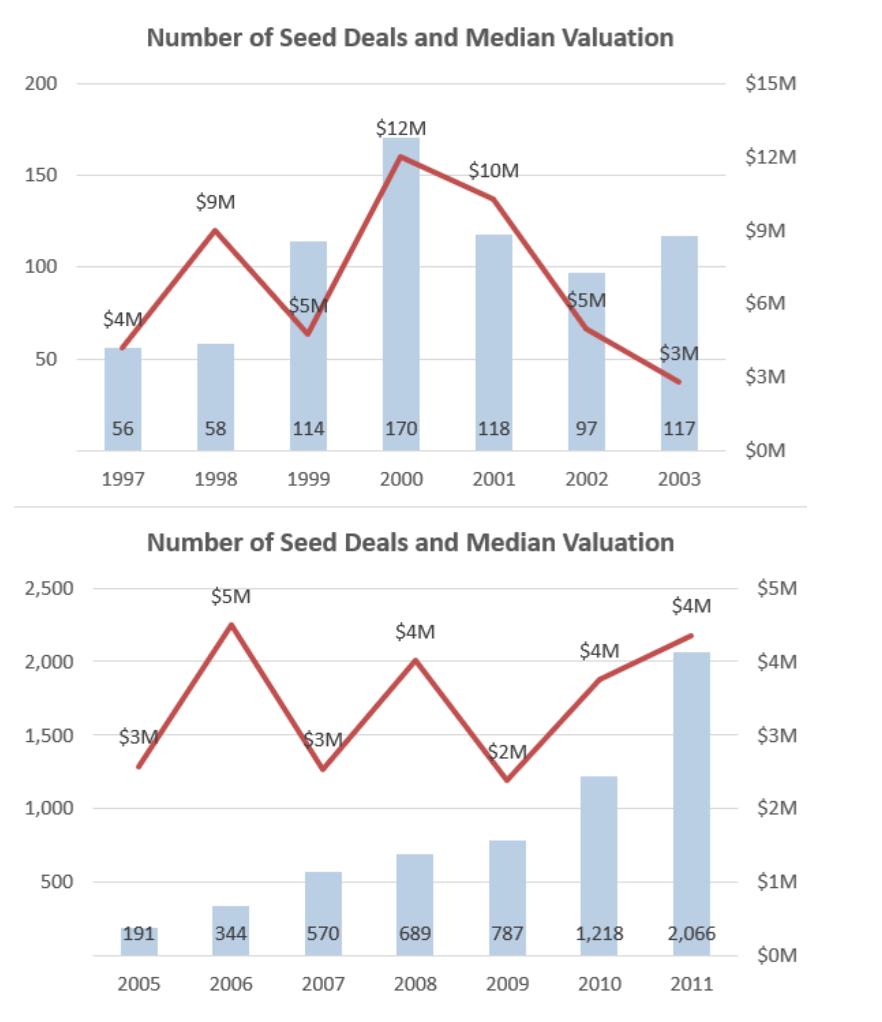 It might look confusing at first, but this chart tells a very simple story:

The top chart shows the market crash of 2000. As you can from the red line, within two years, startup valuations dropped from $12 million to $5 million — more than a 50% drop.

And the bottom chart tells the same story for the crash of 2008 — but this time, startup valuations dropped 50% in just one year.

Now let me explain why this could mean more money for you.

When you make a startup investment, you set a profit target.

Furthermore, most investors recognize that if a startup is successful, it’s more likely to get acquired than to go IPO.

Well, according to PricewaterhouseCoopers and Thomson Reuters, most technology acquisitions take place below $100 million…

And the majority of those acquisitions take place under $50 million.

So, to give yourself the highest probability of making 10x your money, you should invest at valuations of $5 million or less!

Over the past few years, valuations for startups have gone through the roof.

According to data from Wing Venture Capital, in 2019, the average valuation for an early-stage startup was more than $10 million.

That’s more than double the valuation you should be targeting as an entry price!

But if startup valuations drop by 50%, like they have during previous downtowns, you’ll have many more chances to earn at least 1,000% on your money!

If you’d like to learn more basic lessons like this about startup investing, check out the free collection of Resources we created for all of our readers »