Today I’m going to show you how to end Washington’s “Retirement Robbery” — and make 20x more money — with one click of your mouse button.

I know that may sound hard to believe, but stick with me…

Because by the end of today’s article, you’ll see that it’s absolutely true.

85 Years in the Making

In 1933, the U.S. government decided to crack down on the investment markets.

You see, it believed that one of the main contributors to the Depression was rampant speculation by individual investors…

So the government decided to prohibit individual investors from investing in certain types of assets. More specifically, it decided that investors like you could only invest in public companies listed on a stock exchange like the NYSE or the Nasdaq.

And here’s why that’s such a big deal:

Private investments like start-ups are the single most profitable asset class of all time!

The Most Profitable Asset Class in History

Over the last 20 years, with all its ups and downs, the public stock market has returned about 8% per year.

But if you look at the chart below, you’ll see the 20-year returns from investing in private, early-stage start-ups: 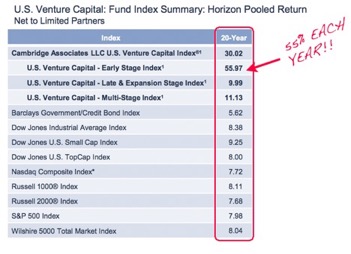 As you can see, by investing in private companies — companies that aren’t listed on an exchange — you could have earned a staggering 55.97% per year.

The government was preventing you from making money!

Here’s how to put the difference between 8% and 55% into perspective:

To be clear, these numbers aren’t based on speculation or projections. They’re based on actual historical performance.

This makes private investments the most profitable asset class in history — and you’ve been locked out of them for the past 85 years.

You see, a few years ago, the government smartened up…

It realized the returns in the private markets were too large to ignore, so it finally decided to open them up to investors like you.

That’s why it passed a new set of laws called The JOBS Act.

These laws went into effect in late 2016. And since then, you’ve been able to invest in these highly profitable deals…

These laws were a welcomed change, but here’s the thing:

The government still kept some serious restrictions in place. And these restrictions have greatly limited your profits.

Your Profits Are Capped!

One of the key restrictions of The JOBS Act involves how much money private companies are allowed to raise from individual investors.

These rules state that, in total, companies can only accept $1 million from individuals, and each investor can only contribute a small amount — in some cases, just a few hundred dollars.

This restriction greatly limits the types of start-ups that will use these new rules — and in turn, the types of profits you can earn.

You see, many start-ups need far more than $1 million to get going. And to earn substantial returns, some investors would choose to invest far more than a few hundred dollars.

Thankfully, there’s something you can do about all this…

It involves clicking on a single link — and if you decide to click on it, you could have the chance to make 20x more on your money.

You see, along with some of the largest entities in the private market investment industry, Crowdability is helping put together an important petition…

This petition is requesting that the government increase the amount private companies can raise — from $1 million to $20 million.

To add your name to this petition, click here »

The petition already has almost 1,000 signatures.

Once it reaches 1,000, it will be delivered to the Chairman of the Securities & Exchange Commission, Jay Clayton.

Hopefully, our voices will be heard, and together, all of us can make more money.