That’s how Mick Mulvaney, White House Chief of Staff, described the coronavirus. It seems he’s having some trouble getting a handle on this global health scare…

And based on the recent stock market sell-off, it seems he’s not the only one.

But I did some exhaustive research into how markets reacted to previous viral outbreaks. And here’s my key takeaway: Keep calm… and get ready to pounce.

You see, stock markets behave predictably in the aftermath of global health scares. And as long as you understand the pattern, you can position yourself for big, quick gains.

Once investors hear the words “viral outbreak,” they hit the sell button on their stocks and ask questions later.

Then they take their cash and stash it in safe havens like U.S. government bonds and gold. That’s why safe havens surge in value during crises.

Then there was SARS in 2003. The S&P 500 dropped by almost 15% — and the safe haven 10-year Treasury bond rallied so strongly that its yield plunged by 80 basis points.

But the coronavirus is far more terrifying than either of these crises.

That’s why stocks are down 18% so far — and it’s why the 10-year Treasury has rallied so furiously that its yield yesterday fell to the lowest level ever: 0.318%.

Phase 2: The End of the World is Nigh

It’s no surprise that a plummeting stock market causes investors to panic. After all, for most investors, their stocks are their main retirement asset.

But that panic goes into hyperdrive when it’s accompanied by “doom and gloom” headlines from familiar characters.

For example, Microsoft co-founder Bill Gates just went on record stating that the coronavirus is starting to behave like the “once-in-a-century pathogen we’ve been worried about.”

Such headlines lead to panic-selling in affected industries like Travel and Retail.

For example, in the immediate aftermath of the SARS outbreak, the entire market was tanking… but airline stocks dropped twice as much as the overall market.

And meanwhile, growth rates for retail spending instantly got chopped in half.

But at some point, things start to turn around…

You see, eventually, the health crisis stops getting worse…

The number of new cases drops. The flow of bad news slows. And then the outlook starts improving.

As J.P. Morgan Asia equity and quantitative strategist Mixo Das explains it, “Past experience of market performance around such events suggests that markets tend to bottom with the peak in new cases and news flow.”

And finally, the markets rebound.

The data is irrefutable here. Take a look…

As you can see in the below chart from CNBC and Charles Schwab, after SARS and Swine Flu, the markets bounced back by roughly double-digits within just one month.

And within six months, the markets were up as much as 40%. 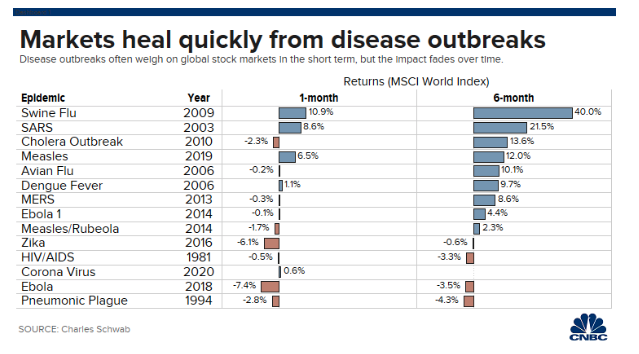 As you can see, the sectors that were hit the hardest tend to rebound the fastest.

For example, once the market rebounded following the SARS crisis, battered sectors like Travel and Retail quickly became top-five performers.

Individual stocks fared even better. For example, Cathay Pacific Airways tumbled 30% as the SARS crisis peaked — but once things turned around, it quickly doubled in price.

And it’ll be the same story with the coronavirus — eventually…

There are several reasons — big, scary reasons — that stocks are dropping.

That’s why, as Matt will explain tomorrow, things could get much worse before they get better.