It told Google to give away one of its “smart speakers” to everyone in America — for free.

The cost of this giveaway? About $3 billion.

For the last hundred years, CEOs from top companies have relied on Morgan Stanley not just for access to capital, but for sound strategic advice.

So why in the world would it tell Google to just give away billions of dollars?

Speaking Is Easier than Typing

Before I explain more, let me back up for a minute…

Let me explain what smart speakers are… and then I can explain why Morgan Stanley would suggest that Google give away $3 billion of them.

A smart speaker is an internet-connected device that can “listen” and interpret human voice commands. For example, you could command your device to do the following:

“Turn off the kitchen lights.”

“Buy me some laundry detergent, toothpaste, and a box of Triscuits.”

The two most popular devices in the market today are Amazon’s Echo (pictured here on the left), and Google’s “Google Home” (on the right). 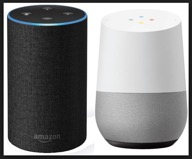 Google Is Getting Its Butt Kicked

The thing is, Google is getting its butt kicked by Amazon right now.

You see, according to research company Canalys, smart speakers have become the “fastest-growing consumer technology in recent history.” By 2022, it’s estimated that 70% of U.S. households will own one.

Whoever wins this race will get access to the majority of the advertising and e-commerce activity that these devices generate — which is expected to add up to hundreds of billions of dollars.

If Google could win a hundred-billion-dollar race for a few billion dollars, Morgan believes it’s only sensible that it should do so.

But a wrench was recently thrown into the sector…

And it’s creating an investment opportunity for investors like you.

Problems on the Horizon

Ever since the Facebook / Cambridge Analytica scandal — when we learned that Facebook has been mining our data and invading our privacy — there’s been growing distrust of big tech companies, even anger.

And now that anger is starting to get directed towards the makers of smart speakers.

In one disturbing story, an Amazon Echo accidentally recorded the private conversation of a couple in Portland, Oregon — and then emailed the conversation to someone in their contacts list.

As the owner of the device said, "I felt invaded. A total privacy invasion. Immediately I said, 'I'm never plugging that device in again because I can't trust it.'"

In another creepy case, a user told his Echo to turn his lights off — and instead, the device started laughing. And as Business Insider reported, “Other users reported hearing the laughter when they were home alone in the dark.”

Americans have bought millions of these devices, but now consumers are at risk of hitting the brakes…

The start-up I’m referring to is called Mycroft.

Mycroft is an open-source software platform that enables developers to add a voice assistant to anything.

For example, companies could use it to build a competitor to Google Home or Amazon Echo…

Or to design “wearable” technologies…

Or to power self-driving cars…

The Power and Value of Open Source

“Open source” refers to a type of computer code that’s made available to everyone, and can be modified by anyone.

For example, WordPress created open source software so users could build websites. Today, it’s used by nearly 100 million enterprises — in fact, WordPress is what we use to power Crowdability’s website — and it’s valued at $1 billion…

And RedHat, which creates open source software for enterprises, is worth nearly $30 billion.

MyCroft could be the next billion-dollar open source success story…

And today, it’s raising capital from investors like you.

Let’s take a look at the opportunity…

Pros and Cons of an Investment

MyCroft has already made significant progress:

It’s raised $2.5 million from top investors including TechStars and 500 Startups…

It has recurring revenues from nearly 20,000 enterprise customers (many of whom pay $1,500 per month to license its software and get technical support)…

And as you learned earlier, the market for voice-assisted technologies is exploding.

On the con side, its valuation is nearly $20 million — which means MyCroft would need to get taken over or go IPO at a value of at least $200 million for investors in this round to make 10x their money. (10x is our profit target for any early-stage investment.)

Given the examples you saw earlier, including the $1 billion valuation of WordPress, a $200 million value in the future isn’t out of the question…

But for an early-stage investment, a $20 million valuation is steep, and it could potentially limit your upside.

To take a deeper look at MyCroft, click here »

Please note: Crowdability has no relationship with MyCroft, or with any of the companies or platforms we write about. Crowdability is an independent provider of education, information and research on start-ups and alternative investments.