How Much You REALLY Need to Retire

So what you’ll read next might come as a surprise:

And 45% of Americans have nothing saved at all. Zero!

What’s your situation? Do you have enough?

And for those of you who think you have enough…

Today I’ll show you why you might want to redo your math.

And during that time, the average person needs $5,000 a month to pay for basics like housing, food, and medical bills.

So the question is:

You need more than $1 million.

Saved by the Stock Market?

To try and reach that $1 million number, many folks invest in the stock market.

Hypothetically, at the end of 30 years, you’d have $1 million.

There’s only one problem:

Just because the market goes up by 6% a year, that doesn’t mean you earn 6% a year…

After taxes, fees and inflation, that 6% a year gets chopped down to about 3%. 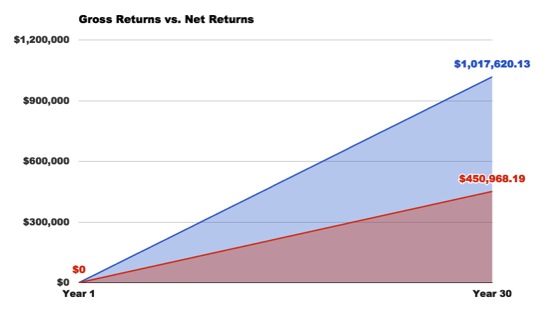 As you can see from the red shaded area, after taxes, fees and inflation, what you thought would be worth $1 million is only worth $450,000.

And that’s not nearly enough to retire.

What About Social Security?

Some folks believe they’ll be saved by Social Security.

Unfortunately, the Congressional Budget Office recently stated that, just 17 years from now, Social Security will basically be unable to meet its obligations.

You’ll need to build a nest egg on your own.

But most folks don’t recognize the severity of this problem.

And sounding the alarm—recognizing that there’s a problem—is the first step in solving this crisis.

Now that you’re aware of the problem, we can start creating some solutions.

So if you’re one of the millions of Americans who don’t have enough to retire (if this crisis is something that affects you), check out Wayne’s article tomorrow:

He’s going to explore some solutions.

In the meantime, so we can get a sense for everyone’s situation, tell us something:

Tell us how many years you have before you retire…