Is this the Key to Curing Cancer?

And according to the National Cancer Institute, nearly 40% of us will be diagnosed with some form of this disease during our lives.

But what if we could outsmart it?

Given what’s at stake, identifying a cure would be one of the great achievements of our lifetime — and could lead all those involved to earn a great fortune.

Which is why we were so excited to hear about a major milestone last week.

Some are calling it “the next revolution in healthcare…”

Stopping Terminal Illnesses in their Tracks

The DNA of every human is roughly 99.5% identical.

But in that last .5%, there are tiny differences called genetic “variants” that make each of us unique.

Now, a fast-emerging field known as “Genetics” aims to identify these variants through the use of powerful but inexpensive DNA tests.

And not only can these tests reveal your ancestry…

But doctors believe they could be used to stop terminal illnesses in their tracks.

One of the leaders in genetic testing is a privately-held start-up called 23andMe.

23andMe has a simple goal:

To leverage our unique genetic variants in order to prevent disease.

Here’s how the company works:

After consumers like us buy one of the company’s mail-order kits for about $150, we provide a sample of our DNA by putting some of our saliva into a cup. 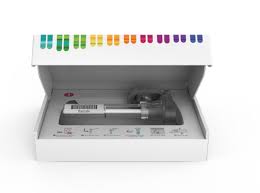 Then, a lab uses our sample to identify hundreds of thousands of variants in our DNA.

And finally, 23andMe analyzes the results and sends us a personalized report.

This report contains a lot of information.

For example, it includes our likelihood of being a carrier for genetic conditions such as Cystic Fibrosis or Tay-Sachs Disease…

And, perhaps most importantly, it reveals whether we have the genetic “markers” that are associated with diseases like Alzheimer's, Parkinson's — or even cancer.

For example, the company could tell you if your ancestors were from Northern Europe or Eastern Russia, and could reveal certain “traits” you might have a predilection towards — like hair loss or “unibrow.”

But last week, the FDA gave 23andMe approval to provide a new type of genetic test.

This test can screen for DNA markers known as “BRCA1” and “BRCA2,” which are linked to higher risk of ovarian, breast, and prostate cancer.

As 23andMe Founder and CEO Anne Wojcicki said in a release related to the announcement, “Being the first and only direct-to-consumer genetics company to receive FDA authorization to test for cancer risk without a prescription is a major milestone for 23andMe and for the consumer.”

But before you run out and buy one of these kits, let me be clear about something...

This test should not be taken as the final word about your health. In fact, as geneticist Eric Topol recently noted, the variants tested by 23andMe make up only a small percentage of hundreds of known genetic mutations and markers.

But such a test could provide us with an important warning sign about a potential health issue — and hopefully, would encourage us to set up an immediate appointment with our doctor.

And it just might be the way to outsmart deadly diseases.

After learning about 23andMe today, you might be excited to take its test yourself…

Or, as a reader of Crowdability, you might be excited to invest in it.

After all, if a company could crack the code on preventing diseases like cancer, an investment in it could turn into a goldmine.

Well, I’ve got good news and bad news for you. The good news first:

A high-quality website exists that enables you to buy shares in private companies.

The site is called EquityZen, and it’s currently gauging investor demand for shares of 23andMe. If there’s enough demand, it will aim to find early investors or employees of 23andMe who are interested in selling their shares.

Meaning, there’s a possibility that you could secure a stake in a company that could one day help provide a cure for cancer.

EquityZen is open only to accredited investors — meaning, those with a net worth of at least $1 million, or annual income of at least $200,000.

In addition, 23andMe has already made enormous progress — so its shares are already very expensive, making it hard to get in (and out) at a good price.

But Wayne and I are watching the Genetic Testing sector closely right now.

Specifically, we’re looking for an early-stage (i.e., inexpensive) private company that has a similar mission to 23andMe, and that everyone can invest in, regardless of net worth or income.

So if you’re interested in the use of science to save lives, keep an eye on your inbox.

Also, if you have any questions or opinions on the Genetics market — or on 23andMe — we’d love to hear from you.

Just click here and share your thoughts with us — we review every one of the comments we receive!

Please note: Crowdability has no relationship with 23andMe, or with any of the platforms or companies we write about. Crowdability is an independent provider of education, information and research on start-ups and alternative investments.