Everyone knows the “simple” way to make money in the market:

For example, buy into a stock when it IPOs, then cash out when it trades higher.

This is a way to make money — a lot of money — even when an IPO tanks.

And to be clear, this has nothing to do with shorting stocks or trading options.

To learn how to use this secret yourself, just read on…

There’ve been plenty of ups and downs in the market this year.

And IPOs have raised over $330 billion.

With the market performing so well, one might assume these IPOs have delivered huge profits to their investors.

But nothing could be farther from the truth…

IPO Investors Are Getting Crushed

So far this year, 43 IPOs have raised $1 billion or more.

And based on new data from Dealogic, 49% of them are trading below their issuance price.

And then the IPO tanks and you lose your shirt!

If we were looking to assign blame, a good place to start would be the investment bankers trying to earn fees. (For example, 9 of Goldman Sachs’ 13 IPOs are currently in the red.)

But what’s the point of assigning blame?

Instead, let’s focus our energy on profiting from IPOs — even when they tank.

Let me show you how…

After its revenues soared to $1+ billion last year, the company was expected to be one of the hottest IPOs of 2021.

But Deliveroo’s shares traded down on opening day. They dropped about 26%. In other words, if you’d invested in Deliveroo’s IPO, you’d quickly have lost 26% of your money.

However, for a different group of investors, Deliveroo’s price drop wasn’t an issue at all…

The Secret to Making Money — Even When Stocks Drop

The investors who nearly doubled their money on Deliveroo didn’t do anything fancy:

They didn’t short Deliveroo’s stock, and they didn’t make any complex options trades.

Instead, they did something simple:

They invested in Deliveroo before it IPO'd — in fact, two years before it went public.

And by doing so, they were able to secure their shares at a far lower price.

That’s why, even after Deliveroo’s stock plummeted, these pre-IPO investors were still sitting on a profit of nearly 100%.

The thing is, this isn’t an isolated example…

For instance, look what happened with New Relic (NEWR) after its IPO.

Soon after it IPO’d, its shares dropped by more than 20%.

But once again, its pre-IPO investors didn’t suffer any losses…

Instead, they made some serious profits:

New Relic’s pre-IPO investors earned gains of 528%, turning every dollar they invested into more than $5. 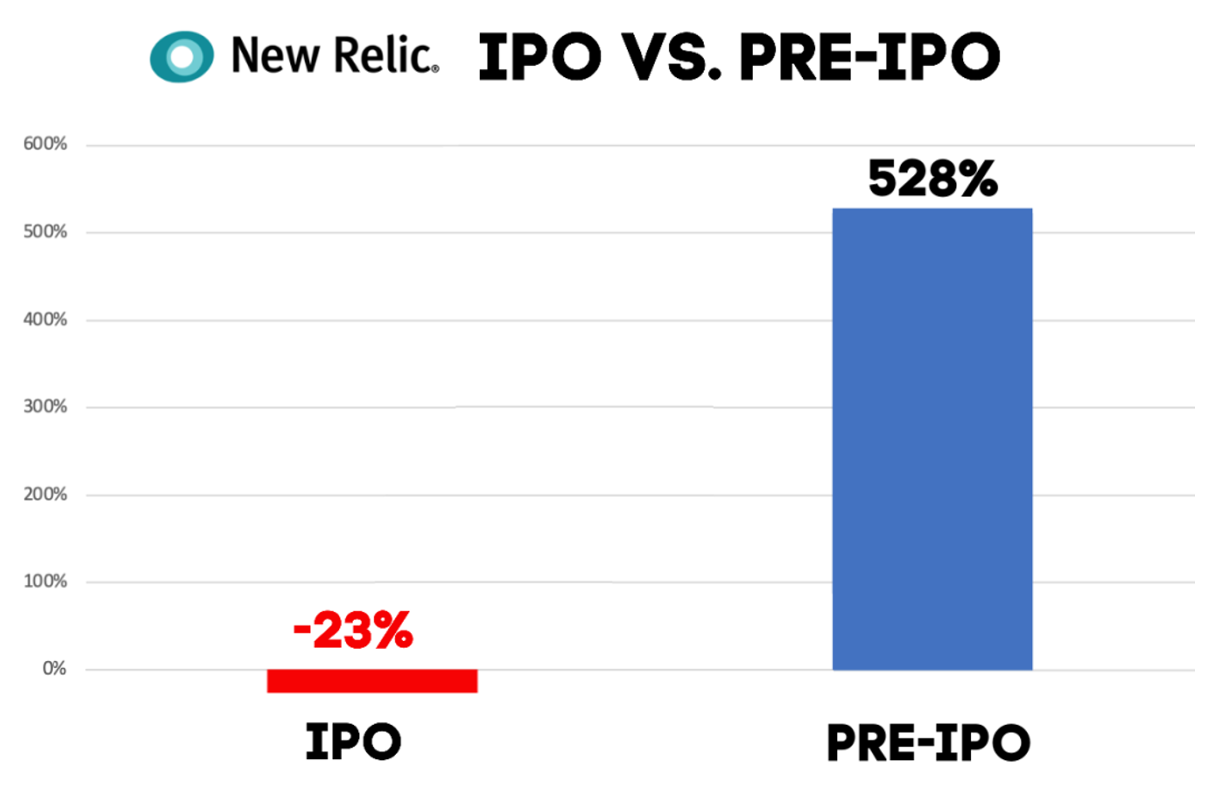 There are countless examples of this same phenomenon.

And every time, it happened because a small group of investors knew an important secret:

They knew how to secure shares in a company before its IPO.

To learn more about getting into pre-IPO deals, keep reading Crowdability…

We’ll teach you everything you need to know!