For reasons that will soon become very clear to you, Wall Street’s biggest banks are on the verge of pouring billions of dollars into crypto-currencies...

And when they do, the entire crypto market could climb to new heights.

As Matt explained yesterday, the best way to take advantage of this opportunity is to invest in crypto-currencies directly.

But with over 1,500 different cryptos on the market, how do you know where to start?

Then I’ll reveal the ones that give you the best shot at earning the largest profits.

Currently, the entire crypto-currency market is worth just $300 billion.

In comparison, the big Wall Street banks control over $10 trillion in assets.

But as soon as these banks start pouring money into cryptos, we believe the entire market will move higher.

The safe way to play this move would be to invest in the largest cryptos in the world:  Bitcoin and Ethereum. After all, combined, these two names represent nearly two-thirds of the value of the entire crypto market.

But here’s the thing: I’d be hard-pressed to argue for investing in either one.

You see, Bitcoin and Ethereum are already highly valued. So even if they increase in value, on a percentage basis, your upside potential is limited — especially when compared to what you might earn from other cryptos.

But there’s also another reason I’d avoid investing in these two cryptos...

The bigger reason I’d avoid Bitcoin and Ethereum is simple:

Wall Street itself will be avoiding Bitcoin and Ethereum!

You see, Wall Street’s big banks aren’t just looking to trade cryptos so they can make some incremental profits…

They’ve got a much bigger agenda…

Last week, we showed you this leaked document that recently came into our possession... 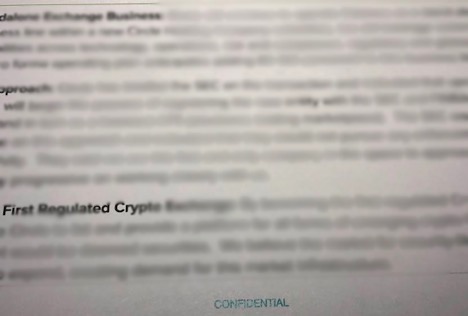 Essentially, this document is Wall Street’s playbook for how it plans to capitalize on crypto-currencies.

Again, the big banks aren’t looking to trade in and out of Bitcoin or Ethereum — or any crypto, for that matter — for a few percentage points.

And this document reveals the simple but shocking truth:

Wall Street believes that cryptos are the future of the global financial system!

Meaning, not only do the banks believe cryptos present a massive profit opportunity...

But they also view cryptos as a potential threat to their core businesses. Let me explain...

Trillions Are at Stake

Bitcoin and Ethereum were created to make it easier to store and spend money, anonymously and privately.

But over time, newer cryptos have been developed that have far more robust functionality.

For example, there are cryptos designed to make it easier for consumers to get loans for their cars and homes.

Other cryptos make it easier for global financial institutions to trade securities, or for high-growth tech companies to get access to capital.

And if these cryptos catch on, they could potentially destroy multi-billion-dollar revenue lines for the big banks!

It earns an additional $30 billion from investment banking, and another $17 billion from its corporate finance and M&A activities.

And because of innovations taking place in the crypto markets right now, all these revenues could one day evaporate.

The Wall Street elite aren’t going to take this threat lying down...

In fact, they’ve already begun to fight back.

Instead, it will aim to dominate this new market!

As we’ve started to explain to you, we’ve uncovered Wall Street’s hidden plan to muscle its way into the world of crypto-currencies...

In fact, next week, we’ll give you the chance to learn about 7 specific crypto-currencies we believe Wall Street will soon be pouring billions of dollars into...

And when it does, it could mean an 86,800% profit windfall for early investors!

So stay tuned… because Matt and I will be revealing far more next week.