Silicon Valley is Dead (why this is good news for you)

For decades now, Silicon Valley has been the epicenter of ultra-profitable start-up investments.

Thousands of companies have set up shop in this tiny corner of the country — and they’ve delivered enormous returns to their earliest investors.

But that’s all about to change.

You see, Silicon Valley’s stranglehold on start-up profits has come to an end...

The Most Profitable Asset Class of All Time

As I mentioned earlier, start-up investments have made many of their earliest investors fabulously wealthy.

For example, Facebook’s first investor turned every $1,000 he invested into $2 million once the company went public.

And as it turns out, the five most profitable investments of all time were all in start-ups.

For most of your life, you’ve been basically locked out of these ultra-profitable investments.

You see, after the Great Depression, the Federal government created strict regulations on who could invest in start-ups.

First of all, all start-up investors were required to have either a net worth in excess of $1 million or earn more than $200,000 per year. If you didn’t meet those criteria, you couldn’t invest in a start-up.

This rule alone excluded roughly 90% of all U.S. investors from making start-up investments.

Basically, the government stated that, unless you had an existing relationship with a start-up, not only could you not invest, but the company couldn’t even tell you that it was accepting new investors.

Since most start-up activity has historically been centered in Silicon Valley, the vast majority of investors across the country were barred from getting into these deals.

Local Governments are Fighting Back

Years ago, it would have been unfathomable to think about launching a company anywhere but Silicon Valley…

As an entrepreneur, being in “The Valley” gives you an immediate “leg up” over start-ups in other areas.

You get access to some of the biggest venture capital investors in the world… access to a large talent pool of engineers and designers… and access to a network of successful entrepreneurs who can act as mentors and advisors.

All these things are critical to first-time founders. But here’s the thing…

After seeing the wealth and economic activity start-ups have helped create in Silicon Valley, other cities started putting plans in place to lure start-ups to their towns…

From special tax incentives, to investing into start-ups directly, cities around the country are “rolling out the red carpet.”

Traditionally, it’s easily claimed the #1 spot every year… until now!

For the first time ever, a new city has claimed the top spot: New York City!

This is a positive sign, but it’s far from the best news that came out of this report…

The most exciting news is that, even though many cities were ranked lower than Silicon Valley, their scores aren’t too far off the mark anymore.

Take a look at the chart below to see what I mean: 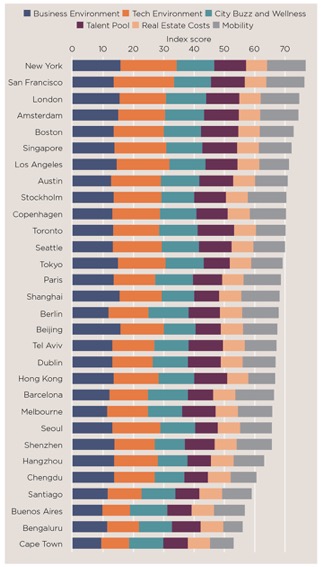 By providing start-ups with a better environment to build their businesses, these cities aren’t just generating more start-up activity…

For example, when a start-up goes from almost nothing to having a valuation of $1 billion or more, it’s known as a “unicorn.” Just like the mythical creature, these start-ups are very rare…

Well, according to a report from start-up research firm CB Insights, 78% of the unicorns created in 2018 came from outside Silicon Valley.

And here’s why this is all amazing news for you…

Not only are more start-ups popping up around the globe, thus giving you more opportunities to invest in one, no matter where you live…

But on top of that, the SEC recently changed its archaic rules around start-up investing.

According to the new rules, for many start-up investments, there are no longer any income or net worth requirements.

Furthermore, the SEC completely eliminated the rules around you needing a pre-existing relationship with the company.

But it gets even better…

As Simple as Ordering a Book

The SEC has also given permission to special websites to list and process start-up investments.

From there, you can download all the relevant information and data on the company, including backgrounds on the management team, the company’s financial performance, and terms of the deal.

Then, if you decide to, you can invest in the company over the web. Basically, the same way you’d buy a book on Amazon.com, now you can claim a stake in a potentially life-changing start-up from your living room sofa.

And to be clear, these websites are helping investors earn serious profits.

For example, WeFunder, one of these funding portals I mentioned, recently released its 2018 year-end performance data.

As it turns out, since 2013, investors on this platform have earned annual unrealized returns of 41% per year. That’s 683% higher than what you’d earn in the stock market.

But it gets better still…

Your Chance to Cash In

You see, because of some of the developments I mentioned earlier, you actually have a big advantage over traditional Silicon Valley-based start-up investors.

You see, because more and more start-ups are launching in cities outside of Silicon Valley — and many of them are using funding platforms to raise capital — you won’t be limited to investment opportunities in “your own backyard.”

In order to stay on top of all of these new deals, you can either:

This way, you won’t have to spend hours scouring the web looking for new opportunities.

As a Crowdability reader, we deliver profitable opportunities right to your front door.