Takeover Alert: The Next Wave of M&A Targets

Takeovers are one of the most surefire ways to earn big profits—fast.

However, for most investors, picking the correct takeover targets has historically been a game of luck, not skill.

With that being said, some investors know how to consistently identify (and profit from) companies that are ripe for a takeover bid.

In case you’ve never owned stock in a company that’s been taken over, let me give you a taste of how profitable these events can be.

Earlier this year, investors in the entertainment company, DreamWorks SKG, woke up to find that their shares had shot up by 24% almost overnight.

As it turns out, Comcast (CMCSA) made an unsolicited bid for the company. Investors could have cashed out the very next day for a 24% gain—and that was based solely on the deal being “announced.” It still hadn’t closed yet.

And if they’d hung on a bit longer, they could have sold their shares for even more—$41 per share, to be exact —and cashed out for a 50% profit in just five months.

Something similar happened this past June when Microsoft (MSFT) agreed to acquire the professional social network, LinkedIn, for $26.2 billion.

The deal hasn’t closed yet, but LinkedIn’s stock is already up by nearly 50% on the announcement alone.

As you can see, owning shares in one of these takeover targets can deliver double-digit gains almost overnight. But how are you supposed to know which companies stand the best chances of being taken over?

Historically, your chance of picking the right company at the right time has been very, very low.

But as it turns out, there’s a way to multiply your chances of picking a takeover by 3,000% (or more). And it all starts with this chart:

Take a Look at This Chart 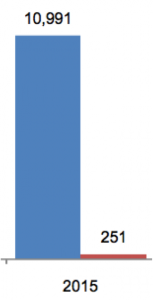 Do you know what those numbers represent?

They’re the number of takeovers that occurred in 2015—in two different markets.

The red bar represents the number of public companies that were taken over...

And the blue bar represents the number of private companies that were taken over.

As you can see, private companies are taken over at a much higher rate than public companies—about 30x the typical public takeover rate, actually.

If you’re a longtime Crowdability reader, this shouldn’t come as a surprise.

That’s because we’ve shown you countless examples of how our friends and fellow angel investors have cashed out of tiny, private investments for windfalls of cash when those companies get acquired.

Take our friend and colleague Howard Lindzon as an example...

Howard was an early investor in private companies like Assistly and Buddy Media when they were just getting off the ground...

Both companies ended up getting acquired by SalesForce.com (CRM): Assistly for $50 million and Buddy Media for $800 million.

These takeovers netted Howard a fantastic return—he made roughly 6,000% on his investments.

And again, in the private markets, takeovers like these happen all the time.

Just Another Bonus of Being a Private Investor

Being able to reap the quick gains available from takeovers is just another benefit of being in the private markets.

Remember, this is also an asset classes that returns 27% per year (on average)—that’s roughly 4 times higher than the stock market averages.

It’s also an investment that doesn’t require a lot of upfront capital. Because the returns are so high, you only need to commit small sums of money—and your investments could still have a big impact on your overall portfolio.

So this is just another reason why you need to start allocating at least some of your money into the private equity markets.

If you haven’t made a private investment yet, keep an eye on your inbox over the next couple of weeks…

We’ll be giving you a shot at owning equity in your first private company—and if it becomes a takeover target, hopefully you can watch its value soar.