For a few weeks now, we’ve been telling you about the explosive legal cannabis market.

And we’ve ushered in stats from dozens of sources to confirm the authenticity of this multi-billion-dollar opportunity.

But today, I want you to throw out every one of the forecasts we’ve shown you.

Why? Because they’re too damn conservative. We now believe we could see the entire marijuana market double in 2020 alone.

And today we’ll explain the reason why.

The Main Driver of Growth

Many people assume that commodity markets like marijuana are driven solely by demand.

But that’s not true anymore.

Nowadays, the main driver is something else:

This boom was enabled by the combination of horizontal drilling and fracking techniques — in other words, technology.

These technologies reversed a 35-year decline in U.S. oil production.

But now a similar technology revolution is about to take place somewhere else:

Thanks to the enormous growth potential of the legal cannabis market, countless companies are aiming to leverage their existing technologies to take advantage of it.

But here’s where things get interesting:

From the start, the company has used its technology to develop inhaled dry-powder drugs for the treatment of lung disease. This represents a market worth between $100 million and $500 million.

Those are impressive numbers.

But they’re nothing compared to the legal marijuana market, which experts believe could be worth $500 billion.

So I wasn’t surprised to read the following in TFF Pharmaceuticals’ IPO prospectus:

“We believe that our TFF platform could be used to formulate a dry powder version of cannabidiol, or CBD, and we are in the early stages of developing an inhaled dry powder drug that could incorporate a dry powder form of CBD.”

In other words, it’s planning to use its technology to target the cannabis market!

Everyone Wants To Use this Technology

And TFF’s “belief” is already turning into market traction.

In the company’s latest presentation, it revealed that it’s engaged with the largest pharmaceutical cannabis company in the world — the $3.1 billion market cap GW Pharmaceuticals (GWPH).

And it’s also engaged with 19 other pot companies!

To put it simply, TFF is actively engaged with all the major marijuana companies: 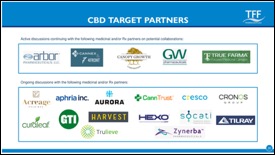 Essentially, this technology is poised to accelerate growth for the entire industry.

But TFF Pharmaceuticals isn’t the only company leveraging technology to take advantage of the growth in the legal marijuana market.

So, to maximize your profits, look to invest in under-the-radar technology companies that can enable this market to grow faster and bigger.

The marijuana market is red-hot right now and it’s only getting hotter.