The Worst Way to Respond to Any Market Crash

We all know Mondays can suck. I got a flat tire yesterday. The third one this year. No fun.

But that’s nothing compared to 33 years ago when Monday really sucked for investors.

In a single day.

Why bring up this depressing memory? Because heading into the anniversary of Black Monday yesterday, many investors feared another nasty crash was imminent.

Thankfully, they were wrong. This time. But another double-digit, single-day crash is inevitable.

So how should we respond? The data is undeniable…

Many stock investors are too young to remember Black Monday. Or for that matter, how the stock market responded afterwards.

Meanwhile, the rest of us just might forget. But we need to know!

You see, the funny thing about sudden selloffs is they typically trigger a kneejerk reaction from investors to sell everything to try to avoid even more losses.

Remember, these are only the averages.

In some instances, the S&P 500 rebounded as much as 5% the very next day and almost 9% within a week.

As Justin Walters of Bespoke explains, “Whether you’re looking at just the current bull market or over a longer period of more than 25 years, the day and week after a big Monday decline have usually been very positive.”

Indeed! So anyone mashing the sell button after a sudden Monday sell-off actually made matters worse because they had to pay up to get back into the market.

How much they had to pay up depends on how long they waited.

Not Merely a Case of the Mondays

It’s important to note that the tendency for stocks to rebound quickly isn’t isolated to this bull market or even Mondays. It universally applies.

Again, the data is undeniable.

As you can see in the chart below, following stock market corrections, defined as a decline of 10% or more from a recent 52-week high close for a major market index, prices recover to prior levels within four months on average. 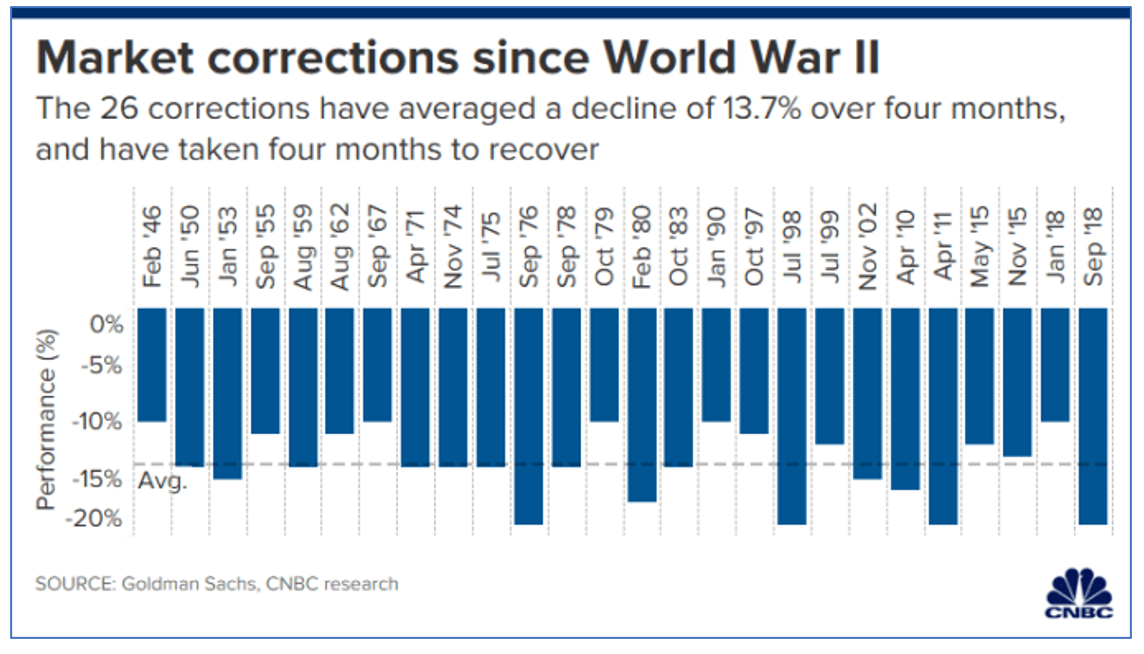 Freaking out and running scared into cash is never a smart response to a sudden market sell-off.

Instead, we need to control our emotions and learn to at least hold tight.

Fair warning: it takes guts. Every fiber in your body is going to scream, "Sell, sell, sell!"

Why? Because we’re hardwired to detest losses and the threat of more losses can be overwhelming.

Making matters worse, every headline is going to serve as confirmation bias of the same.

Consider the headlines plastered over the entire front page after the 1987 crash:

Nothing like conjuring up Depression-era thoughts to freak people out of their investments, right?

Don’t fall for it, though.

In fact, armed with this data, I’m confident that after you weather a few sudden selloffs, you’ll emotionally evolve and actually rejoice at an opportunity to buy the dip, instead of freaking out about the selloff.

That’s how I responded in March 2020, along with hundreds of my readers.

Bottom line: Panic selling after a double-digit market crash is the wrong move 100% of the time. Instead, our trained response should be to buy the dip. Sure, it might not always work out the very next day. But in the long-term, it does.