Three Years of "Solid Gold" Sitting Right in Front of You

In 1979, when I was thirteen, my mother’s boyfriend gave me his old record player.

He was a cool guy, a Boston cop, and I liked him already. But that sealed the deal.

After he helped me hook it up to the stereo, my mom told me to go up to the attic and grab the red crate in the corner. When I found it, my jaw dropped to the floor:

Dozens and dozens of records from the Beatles, Dylan, Hendrix, and the Stones. They’d been right in front of me, the “solid gold” records of an era — and I’d had no idea.

Why am I telling you this story? Simple. You probably don’t know it, but you have “solid gold” sitting right in front of you: the very best investments of our era…

Investments that could help you earn 10x your money or more.

And today, I’m going to show you exactly where to find them.

The solid gold investments I’m referring to are startups — in other words, early-stage private companies that are just getting off the ground.

Startup investing can make you extraordinarily wealthy. For example:

Most startup investors expect their winners to return a minimum of 1,000%.

And according to Cambridge Associates — an investment advisor for the likes of Bill Gates and The Rockefeller Foundation — even when you factor in the winners and the losers, over the last 20 years, these investments have returned roughly 55% per year.

But for most of your life, you’ve been locked out of these ultra-profitable investments.

You see, after the Great Depression, the U.S. government put strict regulations on who could invest in startups.

Unless you were “wealthy” — for example, a minimum net worth of $1 million — you couldn’t invest in this asset class.

This rule excluded about 97% of all U.S. investors from making startup investments.

But then, all of a sudden, everything changed…

Exactly three years ago, in May of 2016, Congress passed a new set of laws called The JOBS Act.

The JOBS Act enabled what’s called “equity crowdfunding,” where many people each contribute a few hundred dollars to a private company, and in return, they receive an ownership stake.

So now anyone can get access to these investments — and anyone can put themselves in position to make millions.

As you can see from this chart, last year, regular people like you invested more than $100 million into startups. That’s up from about $40 million two years ago. 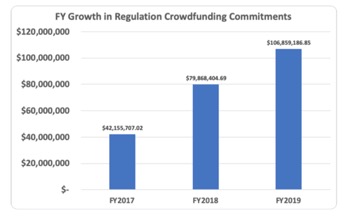 This is an exciting, fast-growing market…

And we believe you should start taking advantage of it.

How To Get Started

Ready to make some “solid gold” investments for yourself?

Here are three ways to get started:

First, check out our free weekly “Deals” email. We send this out every Monday at 11am EST, and it contains a handful of new startup deals for you to explore.

Second, take a look at our free white papers like “Tips from the Pros.” These easy-to-read reports will show you how to separate the good deals from the bad.

And third, if you’d like to accelerate your success in startup investing, consider signing up for our online course, The Early-Stage Playbook, or for one of our premium research services like Private Market Profits.