With the stock up nearly 20%, you decide to take your profits.

That’s how you take profits in a publicly-traded company.

But how do you take your profits in a start-up?

In the start-up world, there’s no such thing as a stock exchange, and there’s no “sell” button. Once you invest, your money might be locked up for years.

And they can make cashing-out of your start-up shares as easy as 1-2-3.

Taking Profits Off The Table

Before I show you these new innovations, let me quickly explain the two main ways you get your money back after investing in a private company:

IPO:  If a start-up turns into a big, successful enterprise, it can go public in an IPO. When it starts trading on an exchange like the NASDAQ, you can sell your shares.

M&A:  When a start-up gets acquired by a bigger company, you’ll receive your piece of the profits.

Start-up investors can earn enormous profits from IPOs and M&A, but it can take many years to get there.

For example, Facebook was founded in 2004, but didn’t go public until 2012 — so its earliest investors had to wait about eight years to earn their returns.

Wouldn’t it be great if you could cash out of your start-up shares more quickly?

Now you can — and there are two ways to do so.

Last summer, a beauty start-up called “Blow LTD” raised about $1 million from investors like you.

Blow LTD offers “on-demand” beauty treatments such as blow-dries for your hair, make up and nail services.

Last week, it received a $10 million strategic investment from Debenhams, a UK retailer.

The thing is, Debenhams was eager to buy more shares than Blow was willing to sell — so it offered to buy out the shares of Blow’s early investors.

And that’s why regular investors like you quickly made 3x their money!

The same situation happened with a craft brewery called BrewDog:

Investors like you contributed about $2.6 million to BrewDog’s funding round…

And a short time later, when a firm called TSG Consumer Partners made a strategic investment in BrewDog, it bought out the start-up’s early investors…

And those investors quickly made a 2,765% return!

The second cash-out strategy involves a new type of market for private shares.

A secondary market gives investors like you the opportunity to sell your start-up shares now — even if the start-up hasn’t been acquired or gone public yet.

For example, a secondary market in the UK has been operating for some time now. It’s called Seedrs, and investors have been using it with great success. For example:

In the U.S., similar markets operated by Acquire Real Estate and CircleUp have recently opened — but they’re for “accredited investors” only (those who earn at least $200k a year, or have a net worth of at least $1 million).

But last week, a secondary market launched for all investors…

A Secondary Market for All

I’m referring to the new secondary market from StartEngine…

We introduced you to StartEngine very recently, and we promised to give you a heads-up when its secondary market launched…

The kinks are still being worked out, so there isn’t much “action” quite yet...

But after taking a quick look, we saw some shares for sale with a familiar name:

Alkane produces a line of awesome-looking trucks that run on alternative fuels.

We showed you this deal back in April. It was in your weekly “Deals” email on Monday, April 3, 2017: 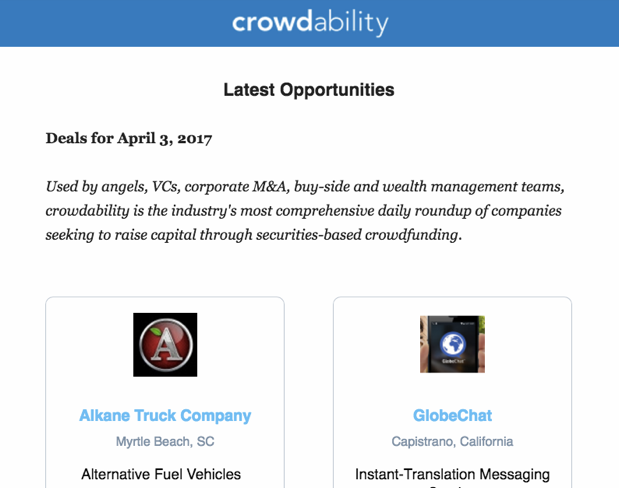 Today, less than six months later, an investor like you is aiming to sell them for $50 a share — more than 10x what he paid for them!

Want To Sell Your Shares?

Have you bought any start-up shares on StartEngine?

If so, you might already be able to sell them for a profit.

To do so, go to StartEngine’s secondary market here »

Click on the green button at the bottom that says “Suggest a Company.”

To be clear, it’s early days yet, and there’s no guarantee that you’ll have a buyer for your shares.

And are allowing you to turn your shares into cash when you want to.