Warning: Do Not Overpay for this Investment

Greed can blind you.

It can take a wildly profitable investment and turn it into a loser.

So today, I want to show you a simple trick to ensure you stay on your toes.

As you’re about to learn, this one trick could help you make a fortune…

In fact, with a little bit of discipline and some time, it could potentially help you turn a $500 investment into several million dollars.

Inspired by a Story

My column today was inspired by a crazy story I read about over the weekend.

You see, a one-year-old startup called Orum just raised money at a valuation of $100 million.

(In case you didn’t know, a private startup’s valuation is similar to a public stock’s market cap. Both terms refer to the total value of the enterprise.)

The thing is, it’s indicative of a larger trend: startup investments have become expensive.

According to research firm PitchBook, the median valuation for an early-stage startup has increased sixfold since 2010 — from about $6 million to $37 million.

Evidently, given the market-beating returns of private startups, many investors are willing to “overpay” to get into a deal.

This is a mistake.

To show you why, let me explain how startup investors make money.

Startup investors make money when a company they invested in has an “exit.” These exits happen in two main ways:

Even when you include the winners and the losers, these exits have returned an average of roughly 55% per year over the past 20 years. And at 55% per year, in 20 years, you could turn a $500 investment into more than $3.2 million.

But many startup investors make a crucial mistake: when they invest, they don’t pay attention to the startup’s valuation.

The thing is, just like with any investment, your profits depend on buying low and selling high — in other words, your entry price and your exit price.

If you pay too high of an entry price (too high of a valuation), you might not make money!

To put yourself in position to earn those 55% annual returns, you need your successful startup investments to return about 10x your money — a 1,000% gain.

Well, according to PricewaterhouseCoopers and Thomson Reuters, the price tag for most tech acquisitions is below $100 million. In fact, the majority take place under $50 million.

So, to give yourself the highest probability of making 10x your money, here’s what to do:

Invest at valuations of $5 million or less!

Keep in mind: the median valuation for an early-stage startup is now $37 million. That means you need to be very selective about which startups to invest in.

Because valuation is so important to successful startup investing, we’ve created a free tool you can use to quickly find deals that are valued at $5 million or less.

Simply click Valuation on the left, and then filter deals valued at $5 million or less. 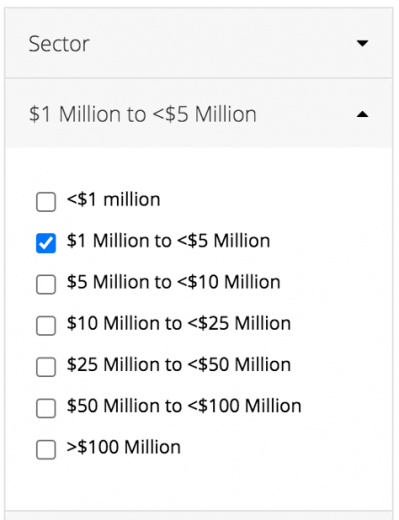 This is just one of the many free resources Crowdability offers to make sure you’re educated about private market investing — and can put yourself in position to profit from this market.