Last week, I came across a new study that could have a major impact on your profits—and not the good kind of impact.

According to this report, your investment profits could get slashed by 87% (or even more) in the coming years.

Today, I’ll reveal the details of this disturbing report…

Then I’ll show you how to protect yourself.

The study I’m referring to was published by Pitchbook.

Pitchbook is a prominent provider of research on the private markets.

Until recently, it was an independent company…

But recognizing the growing importance of the private markets, the mutual fund giant Morningstar recently stepped in to acquire it for more than $200 million.

Today, with the resources of 5,000 employees, Pitchbook publishes exhaustingly-researched and high quality reports on the private markets.

The study I’m referring to is about the current state of the start-up market.

Inside that study is a bombshell—and if you’re not paying attention, it could clobber the profits of private market investors like you.

But before I drop the bombshell on you, let me quickly tell you about one of the most critical concepts in private market investing:

It’s something known as “valuation.”

Valuation is a private company’s value, its market cap.

The bigger the difference, the greater your profits.

At the seed-stage, a start-up is just getting off the ground. It might only have a few employees, an early version of a product, and little to no revenue.

And because it’s so young, a company like this tends to be inexpensive to invest in. In other words, it has a low valuation.

The thing is, because seed-stage tech start-ups have so much potential (companies like Facebook, Uber, and Microsoft were all seed-stage start-ups at one point), when you invest in a “winner,” you can sell your stake at a great profit.

In fact, when you invest in the private markets, you aim for your successful investments to hand you a minimum of 10x.

The reason you aim for such a high return is simple:

For every “winner” you have in your portfolio, you’ll have two or three “losers” that only breakeven or even fail.

But if your winners make 10x, you’ll outperform the stock market by a wide margin. In fact, as many studies have found, you can earn returns of about 27% per year.

27% might not sound so high, but to put those returns in perspective:

And they’re enough to double your money every few years.

How to Collect Your Profits

In order to earn those kinds of returns, one of two things needs to happen to the start-ups you invest in:

IPOs tend to provide the biggest returns, but they don’t happen frequently…

The far more common outcome is an acquisition.

But despite what you read in the press about big-ticket takeovers (like Microsoft’s acquisition of LinkedIn for $26.2 billion), the vast majority of private company acquisitions take place at levels that are more down to earth:

According to PricewaterhouseCoopers and Thomson Reuters, most acquisitions in the tech sector takes place at valuations below $100 million.

In fact, if you dig even deeper, you’ll see that most tech takeovers are in the $30 million to $50 million range.

And this is why Pitchbook’s recent report has us so concerned...

When Prices Go Up, Your Profits Go Down

You see, if most acquisitions take place at valuations under $50 million…

And your goal is to earn 10x your money…

You should be investing in start-ups when they’re valued at $5 million or less.

However, the new study from Pitchbook throws up a warning flag:

This study, called the “VC Valuations Report,” reported that, between 2010 and 2016, the median valuation for seed-stage companies has gone up 87%:

Over the last few years, it seems start-up investing has become more attractive to more investors—and this demand has pushed up prices.

This is bad news.

To make 10x on your investment at that level would require an $80 million acquisition—and as you just learned, that’s far higher than the average takeover.

Your profits could get cut by 80% or more—at which point, the “math” for start-up investing just doesn’t add up anymore.

Here’s How To Earn 10x Your Money

So here’s what you need to do:

Be patient, be careful—and by all means, avoid overpaying for your seed-stage investments!

To help you do this, we built a filter on the “Deals” section of Crowdability »

Just click on “Valuations” on the left-hand side of the page...

Then filter for start-ups that are valued at less than $5 million: 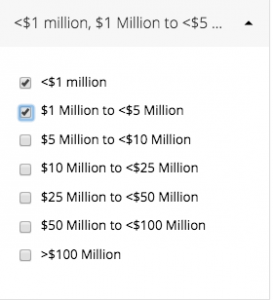 In general, you should only consider investing at valuations above $5 million for two reasons:

Either you’re very familiar with the start-up and its industry...

Or you believe that the company will be acquired or go public for a valuation that far exceeds $50 million.