Back in 2008, Microsoft offered to buy Yahoo for about $50 billion.

Yahoo rejected the offer as being “too low.”

The deal was worth just $4.6 billion, a fraction of what Microsoft had offered.

When Yahoo accepted it, its long-term investors were crestfallen: their opportunity to make a bundle had slipped through their hands.

I want to make sure this never happens to you, so today I’ll show you a simple trick:

And help you get on “rocket ship” investments instead.

Yahoo played an important part in the development of the Internet.

As famous venture capitalist Fred Wilson wrote about the company last week, “They operated the training wheels that got so many of us online.”

But when Microsoft offered to buy it in 2008, its growth period was over. By then, it was a mature business.

In some industries, maturity can be an attractive attribute. It can be a sign of predictable profits and stability.

But in the fast-paced tech industry, that sort of maturity can mean death.

In the tech world, what’s valued most is growth.

This Apple Is Losing Its Shine

To see what I mean, take a look at Apple (Nasdaq: AAPL). 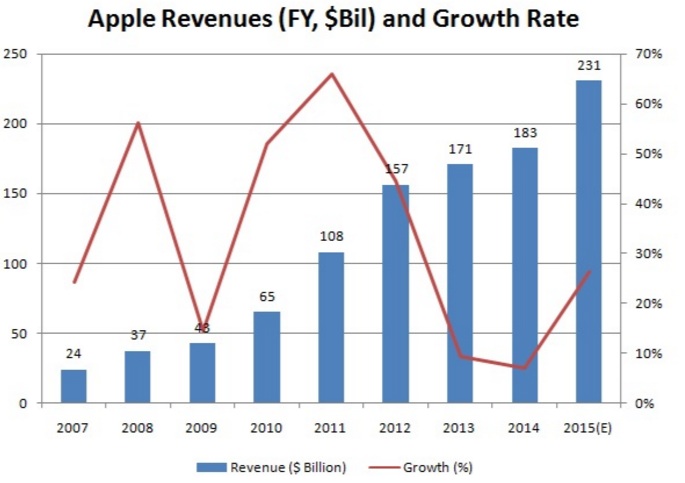 Sure, Apple still generates billions of dollars in revenues…

But as you can see from the unfortunate red line, its growth rate is slowing.

Perhaps that helps explain that why AAPL stock has slipped from a high of about $125 this year, to its current level of about $100:

Because of slowing growth, investors are steering clear.

Given a world where growth is valued above all else, Wayne and I focus our investments on start-ups—the type of companies that can offer explosive growth.

For example, check out the transportation start-up, Uber.

Here’s a chart of Uber’s revenues over the last few years:

As you can see, not only are its revenues substantial (an estimated $26 billion in 2016), but more importantly, its growth is extraordinary.

And Uber’s investors have benefitted from this growth in a way that Yahoo investors could never dream of:

In other words, in just six years, its value has skyrocketed by more 11,600x.

If you look at today’s most valuable tech companies—start-ups like Airbnb, Snapchat, and Palantir—you’ll see they all have extraordinary growth rates.

As an investor, these are the types of companies you want to back:

And by cashing out later—when Google, Apple or Facebook might acquire them for hundreds of millions, or even billions of dollars—you could make a fortune.

So, let the lessons from Yahoo guide your investment strategy:

If you’re looking for big gains, avoid mature companies where growth has stalled.

Instead, go where the growth is.