How To Prepare for 32% Unemployment

The U.S. government has been tracking unemployment for about fifty years.

During that half-century, the worst week on record took place in 1982. That’s when new claims reached 695,000.

But last week, that record was shattered:

And now that looks like the tip of the iceberg…

First of all, let me show you a picture (courtesy of qz.com) that tells this story very well: 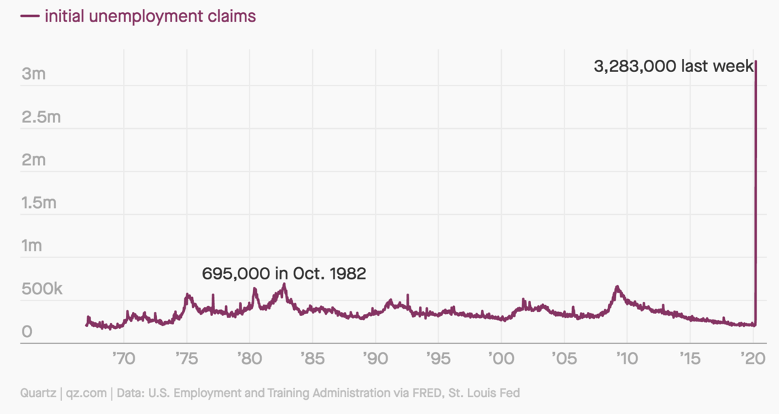 As an economist at the Federal Reserve Bank of St. Louis wrote last week, this is a “unique shock that is unlike any other experienced by the U.S. economy in the last 100 years.”

Furthermore, since most part-time workers, independent contractors, and the self-employed don’t qualify for unemployment benefits, the 3.3 million figure understates the problem.

What happened? Simple. As Ben Herzon, executive director of IHS Markit, a business data and analytics firm, explained it, “A large part of the economy just collapsed.”

The thing is, it’s still collapsing…

Thousands of businesses have already closed because of the coronavirus.

Some hope to reopen again by summer or fall. But many are shuttered forever.

At this rate, unemployment could hit 10% this summer. That would be on par with the very highest level from the recession of 2008/2009.

The bad news is, a 10% number might be painting too rosy of a picture…

As NBC News reported, during a closed-door lunch on Capitol Hill last Tuesday, Secretary of the Treasury Steven Mnuchin made a terrifying announcement:

He warned that unemployment could reach 20%. And that number was confirmed by Harry Holzer, chief economist for the Labor Department during the Clinton administration.

Americans have experienced 20% unemployment just once before:

During the Great Depression of the 1930s.

Unfortunately, a 20% number might be too rosy, as well…

You see, a new report was just released from the Federal Reserve Bank of St. Louis…

And according to this report, 66.8 million workers are now at risk of being laid off.

That would translate to an unemployment rate of 32.1%.

At the moment, the jobs at highest risk are in industries including hospitality, transportation, and mining & energy.

The restaurant industry alone has warned that up to 7 million workers will lose their jobs.

But now layoffs are affecting nearly every industry. And lost jobs create a downward spiral:

It starts with fewer shoppers at stores, fewer vacationers in Vegas, and fewer passengers on planes…

But it ends in a flood of foreclosures, evictions, and bankruptcies.

As the L.A. Times reported, we’ll soon be faced with the “near certainty of an imminent recession.”

Where Do We Go from Here?

None of this bodes well for the overall stock market.

In the simplest of terms, if consumers aren’t buying, companies aren’t making money.

And if companies aren’t making money, their stocks have nowhere to go but down.

Tomorrow, Wayne will explain much more…

And then we’ll start to help you formulate a plan.