Crypto discovery of a lifetime…

Yesterday, Matt told you about a discovery we recently made.

It involves a closely guarded secret in the crypto markets — something we’re calling “The Shadow Market.”

This is unlike anything we’ve seen before.

You see, this underground market is consistently helping a small group of “crypto insiders” earn enormous profits — even while other crypto investors suffer extraordinary losses.

Today we’ll show you how we initially discovered this market…

And most importantly, we’ll show you how it could lead you to one of the lowest risk, highest returning investments of all time.

A Picture is Worth a Thousand Words (And Millions of Dollars)

The key to our discovery is hidden in the two images below.

This first image is what a typical crypto-currency trade confirmation looks like:

And this next image is what a confirmation looks like for a “Shadow Market” trade:

To be clear, decoding crypto trades is difficult, and at a quick glance, the differences between these two images might not be clear to you.

But as it turns out, there are major differences between them…

And these differences — these anomalies — are what eventually led us to the insider’s “Shadow Market.”

You see, while investigating the reasons for these anomalies, we discovered that a small group of crypto insiders was quietly pocketing millions and sometimes billions of dollars in profits — even while the crypto market was in freefall!

For example, take a look at this chart for a crypto token called Cardano (ADA): 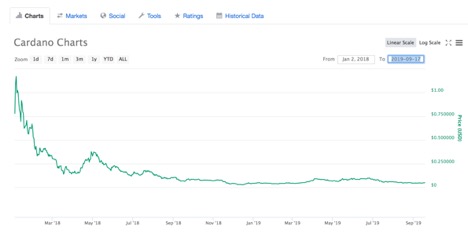 As you can see, after its meteoric rise to $1.22 late last year, Cardano’s price collapsed...

So investors who bought in at the peak are now down more than 97%.

However, there’s another group of Cardano investors — those in the “Shadow Market” — who haven’t lost a dime…

In fact, even though Cardano has cratered, these investors are currently sitting on more than a 1,700% profit. They’ve basically turned every $5,000 they invested into $85,000.

And it’s the same story with hundreds of other trades we’ve analyzed.

So, here’s the bottom line:

Investors who know how to access the “Shadow Market” have been able to earn massive gains, over and over again — even while the rest of the market suffered devastating losses.

Their Secret Can Be Yours

For investors seeking life-changing profits, this is a major discovery…

Imagine being able to multiply your money many times over, even while other investors are watching their wealth evaporate.

This is exactly what the “Shadow Market” allows you to do.

And that’s why we’ve decided to host a special Investor Briefing that’s for Crowdability readers only.

During this live online event, we’ll reveal more about the “Shadow Market,” including why it’s so profitable.

We’ll also reveal how anyone can use this discovery to earn a fortune — it doesn’t matter how much money you have, how much time or experience you have, and it doesn’t even matter whether the overall market is going up or down.

Thanks to the “Shadow Market,” you could turn a small investment into six or possibly even seven figures of profits — even if the crypto market is crumbling.

Furthermore, during the live event, we’ll be sharing the details of our next “Shadow Market” trade.

This trade could be our most profitable investment yet!

To secure your spot for this special event for FREE, click here now »