Last week, the data for new jobs and employment figures hit the market — and the results sent investors a very mixed message.

On one hand, employers indicated they were hiring at a much slower rate. But on the other hand, workers reported shockingly low levels of unemployment.

Again, this is a very mixed message. What’s the story?

Well, as I’ll explain in a moment, I believe I know what’s happening here…

And as you’ll see, it could be very good news for you!

The Missing Piece of the Puzzle

If employers aren’t hiring, but more people are reporting that they’re employed, where are all these extra jobs coming from?

To answer this question, we have to look at one additional data point: 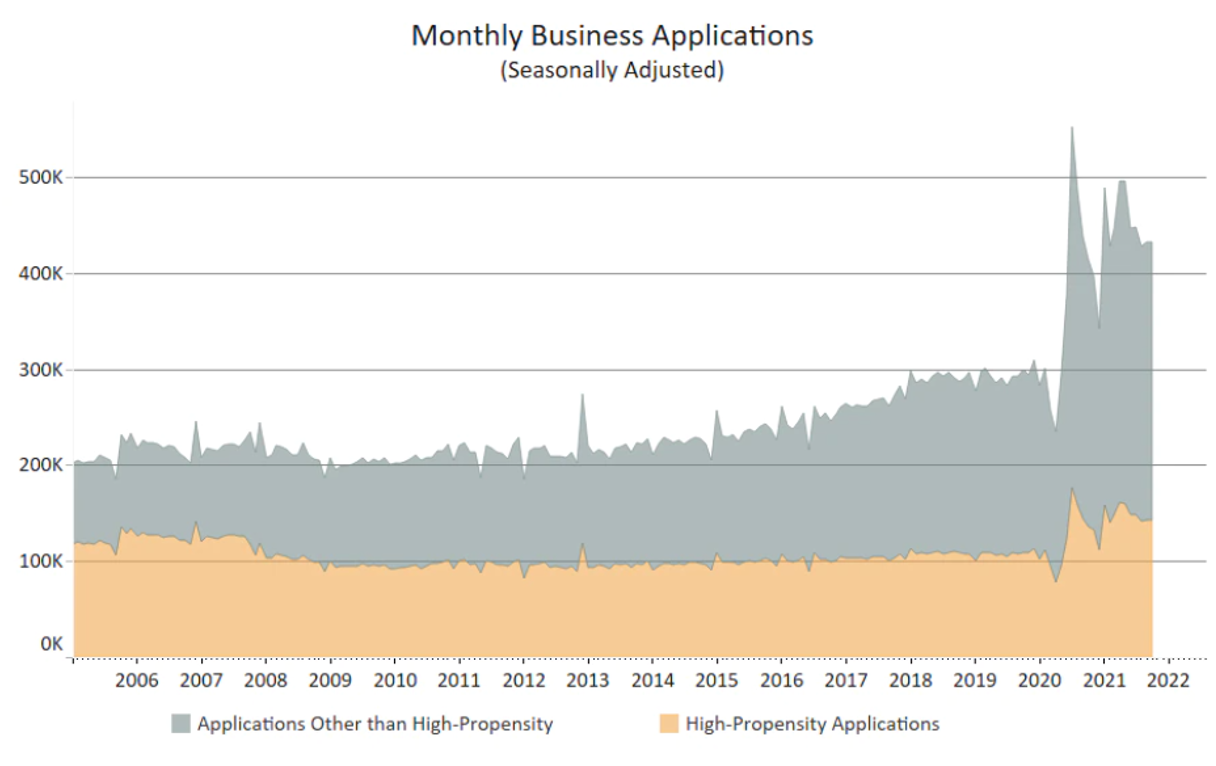 What you’re looking at here is a chart from the U.S. Census showing the number of new businesses being formed each month…

In other words, the number of new startups being created.

As you can see, this number has been steadily climbing for the past decade…

However, it increased dramatically beginning in 2020 — the same year the coronavirus pandemic hit the country and forced employers to lay off millions of workers.

When that happened, we immediately saw an explosion in new startup activity.

You see, when all these workers were laid off or furloughed, it forced hundreds of thousands of them to explore an alternative path for supporting themselves and their families.

And with the traditional “job door” shut for them, many folks made the leap and decided to start their own businesses instead.

As you can see, before the pandemic, roughly 300,00 new businesses were getting formed each month…

But immediately after the pandemic, that number skyrocketed to over 500,000!

And that’s why I think we’re seeing such a big divergence in the jobs and employment numbers:

Big employers aren’t hiring at the same rate as before…

But since many of their former workers have launched their own business, that doesn’t matter.

And as I mentioned earlier, this could be great news for investors like you and me.

That’s because the more startups there are…

The more they’ll be looking for capital…

And therefore, the more opportunities you’ll have to invest in these businesses at the ground floor.

And if you’re a longtime Crowdability reader, you already know that the more opportunities you have to get in at the ground floor, the more chances you have at earning returns that are potentially life-changing.

Early investors in companies like Amazon, Facebook, and Uber had the chance to earn millions of dollars, even with very small starting stakes.

For instance, a $1,000 investment in Facebook when it was first getting started would have been worth north of $2 million by the time the company went public.

Now, that doesn’t mean ALL these new startups will turn into the next Facebook or Amazon…

In fact, statistically speaking, the vast majority of the businesses will likely just breakeven or fail.

Which is why Matt and I believe you need to educate yourself on startup investing before you dive in.

Most importantly, you need a system that can help you vet these deals — in other words, a process for separating the good investments from the bad.

To help you get started, we’ve put together a series of FREE educational resources…