There’s an old saying when it comes to making money with startups:

In other words, the bigger the problem the startup is trying to solve…

Which is why a certain startup sector — one that’s tackling a massive problem — is capturing the lion’s share of investor interest right now.

So today, I’ll tell you about this sector…

And then I’ll show you how to profit from it.

How big is the problem I mentioned a moment ago?

Well, it could literally be the biggest problem we’ve ever faced.

You see, it affects all 7.8 billion people across the world, as well as the 8 million other species that inhabit our planet.

If you haven’t guessed by now, the problem is climate change.

For years, startups have been trying to tackle this problem…

But now, finally, these startups are capturing billions of dollars from professional investors.

They can’t just “bootstrap” their way to profitability…

Or rely on a few thousand dollars from “friends and family” to get their idea off the ground.

They require years of Research & Development — and therefore, they require large amounts of upfront capital.

Which is why, for years, many investors avoided this sector.

But now, that’s all started to change — and to see what I mean, check out this chart… 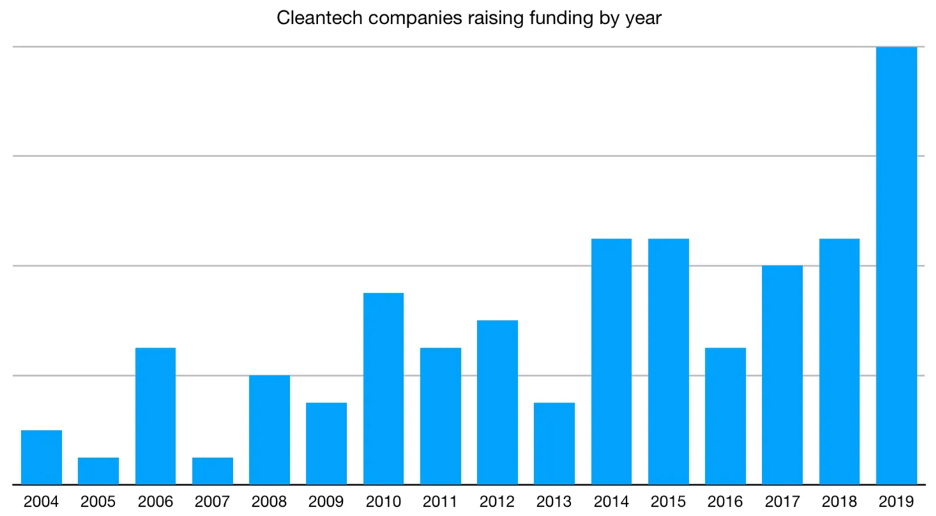 As you can see, the level of investment is skyrocketing.

In fact, venture investments in this sector grew at a rate that was 5x faster than the overall startup funding market.

And it’s likely due to the profits that early investors have finally been able to reap from successful climate-tech companies.

The company went public in 2018, commanding a market cap of roughly $4 billion.

It went from just $5 per share to a peak of $500. So you could have made 100x your money from this one investment.

Well, you could have made much, much more.

Your Chance to Cash In

Normally, you couldn’t participate in big, emerging trends like clean-tech…

Normally, you’d be forced to sit on the sidelines for years until these tiny startups grew into big publicly traded companies…

And at that point, most of the early private investors would already have cashed out for a great deal of money.

But because of a new set of laws known as The JOBS Act, now you can invest in groundbreaking climate-tech startups while they’re still on the ground floor.

And here are a few you could invest in right now…

To be clear, I’m not recommending you run out and invest in all of those startups today.

Before you even consider investing, you need to do your research.

Furthermore, like Matt and I always tell you, when you invest in startups, you can’t just invest in one — you need to build a diversified portfolio.

That’s how you reduce your risk and increase your chances of hitting a home run.

And all the profits it’s experiencing…

You should definitely be considering investments in this sector.

It’s good for the planet…

And it could be very good for your bank account.