The story no one is telling about this historic announcement...

On October 30th, the SEC voted to legalize “equity crowdfunding.” For the first time in 83 years, all investors—regardless of income or net worth—will now be able to invest in high-potential start-up companies. However, with the potential for high returns comes high risk. How will Main Street investors protect themselves?

History Has Been Made

After three years of politics as usual, the U.S. Securities & Exchange Commission just enacted the last remaining piece of The JOBS Act.

The JOBS Act is a set of laws that opens up the private equity markets to all U.S. citizens. Historically, only “accredited investors” (those who earn at least $200k per year, or have a net worth of at least $1 million) were allowed to invest in private equity deals such as start-ups.

But now, because of the enactment of Title III of The JOBS Act, all investors, regardless of income or net worth, can enter this market.

For investors, this is reason to celebrate. Historically, this “off-limits” market has been delivering the highest returns. In fact, prior to Title III being enacted, CNBC called private equity "The best retirement asset you can’t have.” According to the article, "Time and again private equity has proven that it's the single-best asset class for public pensions, by delivering superior returns over longtime horizons."

However, with the potential for greater returns comes greater risk—and investors need to be prepared.

In a moment, we’ll explain the details of this new law, and the specific steps investors should take to prepare themselves.

But first, let’s re-cap how we got here.

The History of The JOBS Act

There were two main inspirations for the creation of The JOBS Act:

Click Above to See a Brief History of Equity Crowdfunding

The downside here is that, if these projects go on to become billion-dollar enterprises, the initial backers won’t receive any of the upside. Not a penny.

A perfect example of this “win/lose” scenario happened with a company called Oculus VR. Oculus originally raised capital for its virtual reality headset on Kickstarter. Two years later, Facebook acquired the company for $2 billion, making its founder extraordinarily wealthy—but leaving its Kickstarter backers without a cent.

Title III of The JOBS Act aims to remedy this with a concept known as “equity crowdfunding.”

With equity crowdfunding, financial contributors receive equity—i.e., an actual ownership stake in the businesses they back. So if a business becomes the next Oculus (or Microsoft or Google), early backers will receive their share of the gains.

But in order to make this happen, 83 years of securities laws had to be rolled back. You see, ever since The Great Depression, everyday citizens have been legally prohibited from investing in privately-held securities.

With the passage of the JOBS Act, all that is now changing.

Although the JOBS Act was passed in 2012, the SEC didn’t enact it all at once.

One of the first components it did enact was “Title II.” This piece of the law—which applies only to Accredited investors—allows start-ups to advertise that they’re raising capital, and to post their investment deals online.

Deals are hosted on websites known as “Funding Platforms.” These platforms play matchmaker between entrepreneurs seeking capital and investors looking to invest.

In 2014, Title II’s first full year of implementation, over $300 million was raised in the U.S. on these platforms. So the industry grew from $0 to $300 million in just over one year.

To put that in perspective, it took “marketplace lending” companies like Lending Club and Prosper nearly five years to reach the same amount of capital raised. 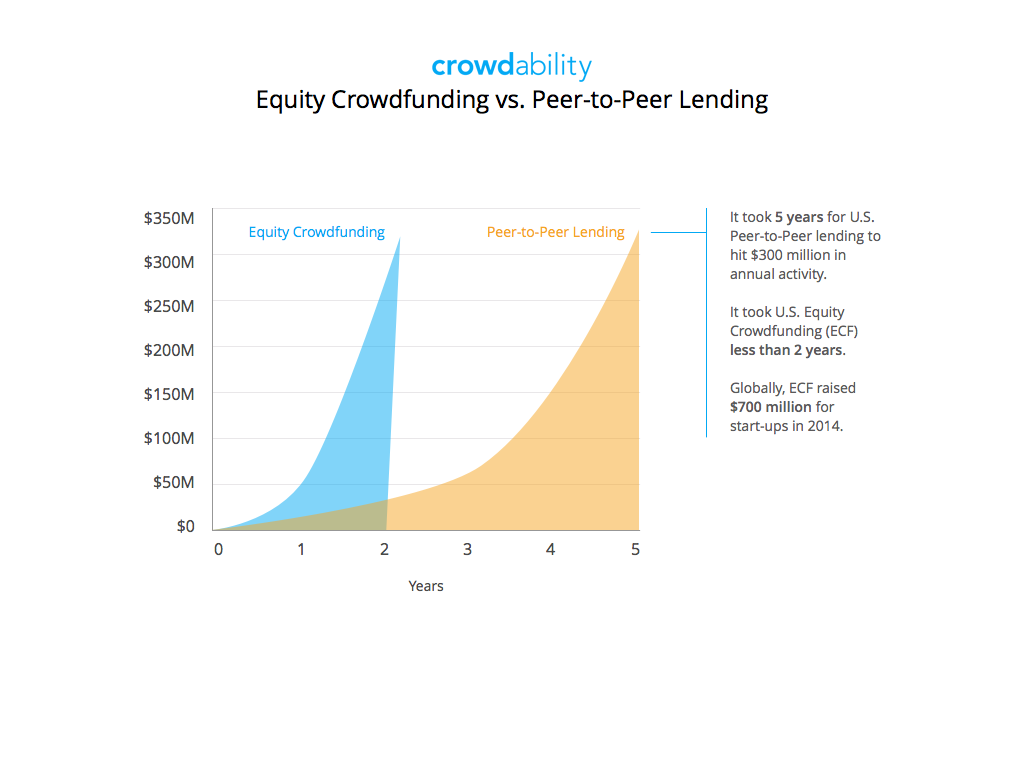 In June of 2015, another piece of The JOBS Act was enacted: Title IV.

Title IV was designed to help later-stage private companies (i.e., companies that already have a proven product, and may already have millions of dollars in sales) raise money.

Title IV deals are sometimes referred to as “Mini-IPOs.” They earned this moniker because they require a costly and time-consuming filing and review process by the SEC that’s only slightly less onerous than a traditional IPO.

Because of this heavy vetting process, the SEC determined that non-accredited investors could take part in Title IV deals.

And investor demand for these deals has been robust. For example, three companies on a funding platform called SeedInvest have collected more than $10 million in reservations each since Title IV was enacted just a few months ago.

What’s driving all this demand for private market investments?

For one, the world’s highest-growth companies are staying private longer. And if these companies are already worth billions of dollars by the time they go public, it’s unlikely you’ll see a dramatic increase in share price after the IPO.

In fact, according to Renaissance Capital, the average IPO in 2015 provided a negative return on its first day, falling 3.5%.

Airbnb Raises $1.5 Billion in One of Largest Private Placements

Uber Valued at More Than $50 Billion

Coincidentally, Uber isn’t just one of the faster growing start-ups in the world today—it’s also one of the first major crowdfunding success stories:

In 2010, Uber leveraged a website called AngelList (which is now one of the largest equity crowdfunding platforms) to raise its initial round of funding.

If you’d been a member of AngelList, and had been accredited at the time, you could have become an angel investor in Uber when it was still “cheap.”

And here’s what that would have done for your portfolio: 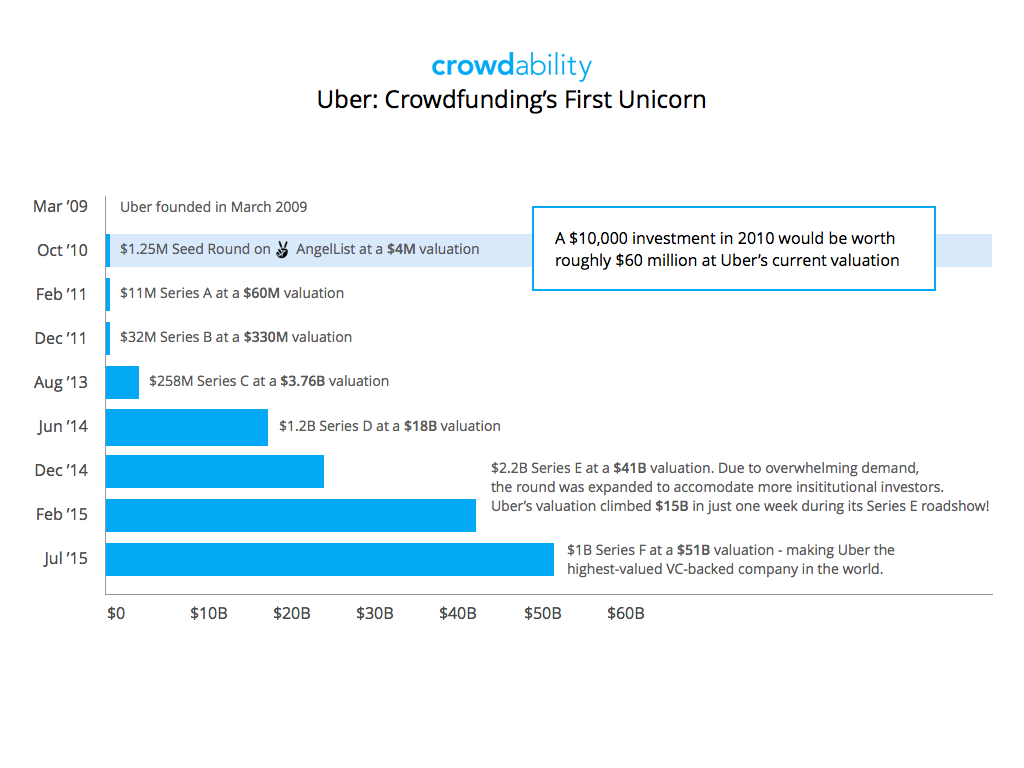 That’s 6,000 times your money on a single investment.

Stories like Uber’s are creating a lot of excitement around early-stage investing.

So when the first batch of Title III deals comes online next year, it’s widely expected that investors will be eager to dive in. (In fact, SeedInvest recently polled 18,000 non-accredited investors and discovered that 68% of them are likely to invest in start-ups when the laws change.)

The deals will take place on Title III funding platforms that are regulated by the SEC and the Financial Industry Regulatory Authority (FINRA).

But will the new regulations do enough to protect investors?

Well, during the vote to approve Title III, the SEC commissioners cited “investor protection” as a high priority more than a dozen times...

And the final rules do contain certain protections—for example, someone making less than $100,000 per year can only invest 5% of their income into Title III deals (so if they earn $50,000 per year, they can invest $2,500).

But here’s the unfortunate truth about these protective provisions:

If someone jumps into this market without knowing what they’re doing, the SEC’s protections can do little more than limit an investor’s losses.

You see, despite the high historical returns provided by early-stage companies, start-ups are an inherently high-risk investment. In fact, most fail.

If you look at the portfolios of most venture capital funds—including top funds like Union Square Ventures—here’s the math you’ll find:

Most of their investments lose money; a small portion break even; and ultimately, just a small handful of deals provide the vast majority of the returns.

This concept—that the majority of start-up investments in a given portfolio will go to zero—is inconsistent with the headlines investors are getting from the press.

And it’s something that, up until now, individual investors haven’t had reason to learn about. They’re used to investing in things that tend to increase in value, if only a bit, almost every year—like a blue chip stock or a diversified mutual fund.

If an investor takes the $2,500 “chip” the SEC allots them, and they bet it all on a single start-up, odds are, they’re going to lose the whole thing.

To protect themselves, they need to understand start-up investing basics—for example, how to build a portfolio of start-ups, and how to weed out the riskiest companies.

Where to Get Help

Unfortunately, their options for receiving sound advice are limited.

Few financial advisors or brokers have experience making early-stage technology investments—so if someone calls their broker hoping to get an opinion about a start-up, they shouldn’t expect to get an informed response.

And even if these advisors try to educate themselves, mainstream resources for credible research on the topic are limited. Morningstar or Bloomberg, for instance, only provide ratings and research on public securities.

So, despite the excitement around Title III, and despite the SEC’s attempt to protect investors, most U.S. citizens aren’t equipped to succeed in this market.

That’s the story no one is talking about.

And that’s why we launched Crowdability nearly two years ago:

As the SEC worked to enact Title III, we worked to prepare individual investors (and even financial advisors) for what was coming.

To ensure we were teaching them the right concepts, we built a panel of professional venture capitalists and angel investors. And over the course of two years, input from these professionals helped us shape and build our education and research infrastructure—an infrastructure that we hope will now help millions of ordinary citizens succeed as early-stage investors.

Nearly 100,000 members have already subscribed to our various education and research services.

Our content—including essays, white papers and research reports—can be accessed for free on our website: www.crowdability.com

By educating and empowering individual investors, we believe we can help them avoid making costly mistakes—and provide them the highest chances for success.

For more information about Crowdability or for press inquiries, please contact us at press@crowdability.com