When I was growing up, my mom would wake up early to brew a big pot of coffee.

She used an old-school, stove-top percolator — one of the big ones that could make about five or six cups of coffee. But here’s the thing:

Because she and my dad were always in such a rush to get to work, they’d only drink about half a cup each before running out of the house.

Things have changed a lot since then…

For example, today, I made my morning coffee about 60 seconds before I left my house. I dropped a capsule of dark-roast coffee into my Nespresso machine, pressed brew, and then put on the top of my “to-go” mug just before I ran out.

And as it turns out, I’m not alone in this habit:

191 million Americans drink coffee every day — and 46% of them are drinking it “on-the-go.”

This new concept of high-quality, nearly instant “single serve” coffee has created an enormous market — and an enormous opportunity for investors.

You see, there’s been a wave of consolidation in the coffee market over the past few years. And those lucky enough to capitalize on it have made a fortune.

Today, I’ll walk you through this explosive market and show you how to take advantage of it.

Perhaps the most notable trend it discovered is the shift to drinking coffee outside the home. As Kyra Auffermann of the National Coffee Association said:

"It’s important to note that [the shift to out-of-home coffee consumption] is not only a question of preference, but also a reflection of our increasingly mobile (and WiFi-dependent) lifestyles: ultimately, people drink coffee where and when works for them."

In a related trend, instead of brewing entire pots of coffee, more and more consumers are enjoying “single-serve” solutions like I do through machines from makers like Nespresso and Keurig.

Here’s what these trends look like in a chart: 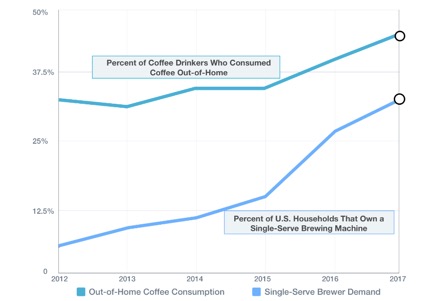 As you can see from the light-blue line on the lower part of this chart, the percentage of U.S. households that own a single-serve brewing machine has grown seven-fold recently, from about 5% in 2012, to about 35% in 2017.

Furthermore, it seems this trend is gathering steam:

Clearly, this is a huge, fast-growing market.

To tap into these trends, a start-up called MoJoe Brewing Co. has created an innovative product:

To use it, you just add water, pop in your favorite ground coffee (or drop in one of MoJoe’s capsules) — and in about ten minutes, you can enjoy a fresh, high-quality cup of coffee anywhere, anytime.

Essentially, this is a Keurig or Nespresso machine that lives inside your travel mug. 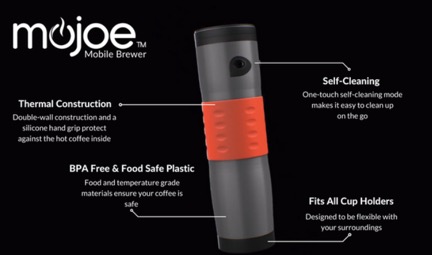 VacDrip is a mobile brewing system that borrows concepts both from traditional drip brewing, and what’s called vacuum brewing. Essentially, water vapor heats the water up to 200 degrees and moves the heated water through the coffee grounds.

As Michael Casey from Fox News said: “No more waiting at home or stopping at a cafe for a cup of coffee – the mojoe™ brews a fresh cup for you wherever you are.”

Its brewing system has already been fully prototyped and tested, and is now ready for manufacturing and distribution…

And the MoJoe system has received several awards, including a “Best New Product Award” at CoffeeFest NY 2016.

But I’m also intrigued because I’m an investor.

You see, coffee is currently an exciting sector for investors.

For example, according to a report from investment bank Rabobank, the coffee industry is undergoing consolidation, and is mirroring the high level of M&A activity recently experienced in the beer market.

For example, over the past five years, JAB Holdings (the #2 coffee player after Nestle) has spent more than $30 billion on acquisitions, including Peet’s Coffee, Stumptown, Keurig Green Mountain, and Caribou Coffee — and it shows no sign of slowing down its M&A activity.

And now, Lavazza, the #3 player, is aiming to catch up.

As Antonio Baravalle, Lavazza’s chief executive, said: “If we want to be independent in this big consolidation process, there is only one possibility — to grow. Either you sell or you grow, there is no other alternative.”

And given its strong balance sheet, Lavazza is expected to spend up to $2.4 billion on acquisitions.

To claim its stake in this fast-growing and fast-consolidating market — and put itself in a position to become a takeover target as the industry consolidates — Mojoe is raising a new round of capital.

The company is currently seeking to raise about $100,000 from investors like you.

The valuation is $6 million (and it’s just $4 million for investors who fund the first $50,000 of this funding round), and the minimum investment is $250.

Should you consider an investment?

The Pros and Cons

On the “pro” side, MoJoe is going after a huge market, and it holds patent-pending technology and a first-mover advantage.

It faces competition from Keurig, Green Mountain, and other single-serve brewers — as well as fast-food chains like Starbucks, Dunkin Donuts, and McDonald's…

And most of all, the company has only built a prototype so far. A finalized version of the MoJoe won’t be released until mid-2018.

So it’s possible that unexpected problems might crop up before its official release.

Please note: Crowdability has no relationship with MoJoe, or with any of the platforms or companies we write about. Crowdability is an independent provider of education, information and research on start-ups and alternative investments.